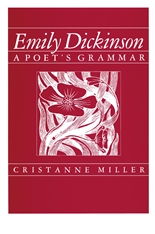 In this inventive work on Emily Dickinson’s poetry, Cristanne Miller traces the roots of Dickinson’s unusual, compressed, ungrammatical, and richly ambiguous style, finding them in sources as different as the New Testament and the daily patterns of women’s speech. Dickinson writes as she does both because she is steeped in the great patriarchal texts of her culture, from the Bible and hymns to Herbert’s poetry and Emerson’s prose, and because she is conscious of writing as a woman in an age and culture that assume great and serious poets are male.

Miller observes that Dickinson’s language deviates from normal construction along definable and consistent lines; consequently it lends itself to the categorical analysis of an interpretive “grammar” such as the one she has constructed in this book. In order to facilitate the reading of Dickinson’s poems and to reveal the values and assumptions behind the poet’s manipulations of language, Miller examines in this grammar how specific elements of the poet’s style tend to function in various contexts. Because many, especially modernist, poets use some of the same techniques, the grammar throws light on the poetic syntax of other writers as well.

In the course of her analysis, Miller draws not only on traditional historical and linguistic sources but also on current sociolinguistic studies of gender and speech and on feminist descriptions of women’s writing. Dickinson’s language, she concludes, could almost have been designed as a model for twentieth-century theories of what a women’s language might be. As a critical examination of the relationship between linguistic style and literary identity in America’s greatest woman poet, Emily Dickinson: A Poet’s Grammar provides a significant addition to feminist literary studies.