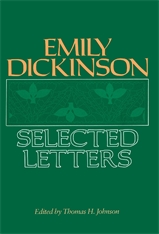 “[These letters] present us with as inward a view of one of God’s rarer creatures as we are likely to be given… The letters themselves are as no others. The briefest line can be a mystery (and, when fathomed, a communion), the formal note a sign… If [these letters] are put alongside those of…Coleridge and Keats, they will present the most striking contrast in a poet’s reactions and sensibilities. But they will stand there unashamed.”—The Times

“She was no solemn bookworm destined to grow into a crabbed recluse, but a lively original creature, fully participating in the joys and despairs of a busy circle of friends and relatives… Here was a woman capable of the most intense emotion who was forced, or forced herself, to crystallize her feelings into words and phrases. The letters and poems are all of a piece. The letters, in fact, read sometimes like the raw materials of the poems.”—Listener

“Emily Dickinson’s letters are among the major treasures of American literature… [In] this one-volume selection…virtually everything of interest to the general reader or nonspecialist has been retained.”—Library Journal