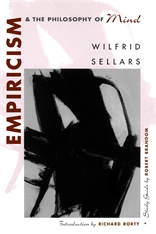 Empiricism and the Philosophy of Mind

Supplement by Robert B. Brandom

The most important work by one of America’s greatest twentieth-century philosophers, Empiricism and the Philosophy of Mind is both the epitome of Wilfrid Sellars’ entire philosophical system and a key document in the history of philosophy. First published in essay form in 1956, it helped bring about a sea change in analytic philosophy. It broke the link, which had bound Russell and Ayer to Locke and Hume—the doctrine of “knowledge by acquaintance.” Sellars’s attack on the Myth of the Given in Empiricism and the Philosophy of Mind was a decisive move in turning analytic philosophy away from the foundationalist motives of the logical empiricists and raised doubts about the very idea of “epistemology.”

With an introduction by Richard Rorty to situate the work within the history of recent philosophy, and with a study guide by Robert Brandom, this publication of Empiricism and the Philosophy of Mind makes a difficult but indisputably significant figure in the development of analytic philosophy clear and comprehensible to anyone who would understand that philosophy or its history.