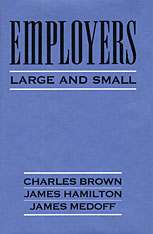 Small business has captured the imagination of both the popular press and politicians. The tradition that has created sympathy for the small entrepreneur has been strengthened in recent years by images of small firms as dynamic, growing, and flexible and of large firms as struggling, outdated, and intractable in the face of changing competitive environments. There is, it appears, an added fervor for America’s support of “the little guy.”

Employers Large and Small draws on existing data and new research to create a more complete picture of the roles of large and small employers, challenging much of the conventional wisdom. It argues that the oft-cited achievement of small firms in generating new jobs is primarily a reflection of the fact that industries in which the typical firm is small have grown rapidly in recent years.

The authors show that there are striking differences between large and small employers—that in fact large employers pay higher wages, offer better fringe benefits, and on average offer a more attractive package of working conditions and compensation. These differences reflect real challenges faced by small firms: they pay more for their nonlabor inputs and for many fringe benefits if they choose to offer them.

Employers Large and Small also goes beyond the workplace, examining the role of large and small employers in politics. Despite the typical portrayal of small business as the underdog in policy disputes, the political resources of small employers are substantial. The PAC contributions of small business, for example, are as large as those of labor unions and nearly two-thirds those of big business.

The authors show that the economic and political differences between large and small employers are sizable, are significant influences in the working lives of Americans, and are at odds with current policy assumptions.