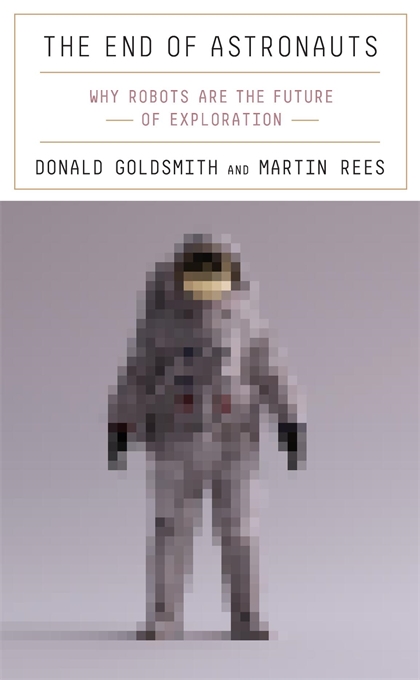 The End of Astronauts

Why Robots Are the Future of Exploration

A world-renowned astronomer and an esteemed science writer make the provocative argument for space exploration without astronauts.

Human journeys into space fill us with wonder. But the thrill of space travel for astronauts comes at enormous expense and is fraught with peril. As our robot explorers grow more competent, governments and corporations must ask, does our desire to send astronauts to the Moon and Mars justify the cost and danger? Donald Goldsmith and Martin Rees believe that beyond low-Earth orbit, space exploration should proceed without humans.

In The End of Astronauts, Goldsmith and Rees weigh the benefits and risks of human exploration across the solar system. In space humans require air, food, and water, along with protection from potentially deadly radiation and high-energy particles, at a cost of more than ten times that of robotic exploration. Meanwhile, automated explorers have demonstrated the ability to investigate planetary surfaces efficiently and effectively, operating autonomously or under direction from Earth. Although Goldsmith and Rees are alert to the limits of artificial intelligence, they know that our robots steadily improve, while our bodies do not. Today a robot cannot equal a geologist’s expertise, but by the time we land a geologist on Mars, this advantage will diminish significantly.

Decades of research and experience, together with interviews with scientific authorities and former astronauts, offer convincing arguments that robots represent the future of space exploration. The End of Astronauts also examines how spacefaring AI might be regulated as corporations race to privatize the stars. We may eventually decide that humans belong in space despite the dangers and expense, but their paths will follow routes set by robots.