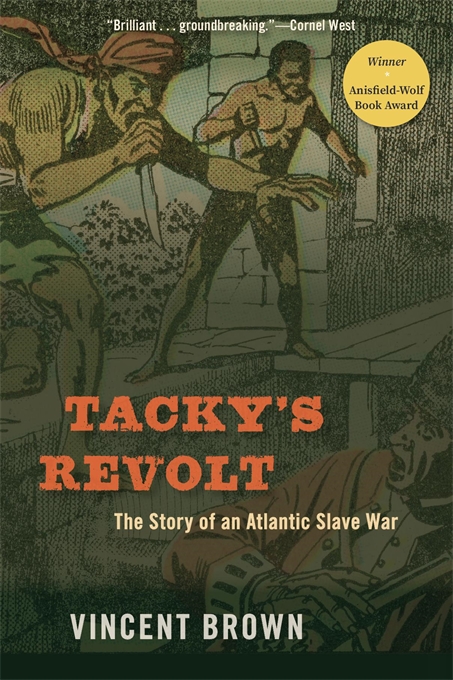 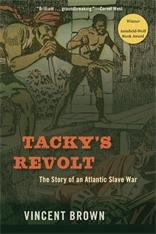 “A sobering read for contemporary audiences in countries engaged in forever wars, reminding us how easily and arbitrarily the edges of empire, and its evils, can fade from or focus our vision. It is also a useful reminder that the distinction between victory and defeat, when it comes to insurgencies, is often fleeting: Tacky may have lost his battle, but the enslaved did eventually win the war.”—Casey Cep, New Yorker

“Brown derives not only a story of the insurrection, but ‘a martial geography of Atlantic slavery,’ vividly demonstrating how warfare shaped every aspect of bondage… Forty years after Tacky’s defeat, new arrivals from Africa were still hearing about the daring rebels who upended the island.”—Julian Lucas, Harper’s

“Outstanding… Brown has produced one of the best treatments of slavery ever written.”—Steve Hahn, Boston Review

“A phenomenally insightful and compelling book on both the brutality of British colonialism and the desire for freedom.”—Brad Evans, Los Angeles Review of Books

“Virtuosic… A revelation, and a true heir to The Black Jacobins and The Common Wind… Through prodigious and imaginative work with the archives, or, rather, with their absences—namely, of the voices of the enslaved—Brown shows that, although slavers tried to unmoor the enslaved from their homes and communities, language and culture, and sense of self, the connections between various African communities and the diaspora endured despite the violence of the plantation regime.”—Laleh Khalili, New Statesman

“Brilliant…groundbreaking…Brown’s profound analysis and revolutionary vision of the Age of Slave War—from the too-often overlooked Tacky’s Revolt to the better-known Haitian Revolution—gives us an original view of the birth of modern freedom in the New World.”—Cornel West

“Brown’s brilliant analysis reveals how slave rebellions across the Americas depended upon experienced combatants captured in African conflicts and then sold to Europeans, refuting the canard that slave traders gathered their victims randomly. While tracing the relationships between African warfare and uprisings in the Americas, Brown offers beautifully written portraits of those who survived the crushing forces of colonial imperialism and fought for freedom. Above all else, this astute and comprehensive book is about agency.”—Henry Louis Gates, Jr.

“Brown’s reframing of slavery as war allows us to better understand enslaved people as soldiers, diplomats, sailors, and community leaders dedicated to Black freedom (both then and now). Specifically, Brown’s book shows how—within the broader war—enslaved men, women, and children defended themselves and even counterattacked… Will undoubtedly shape generations of scholarship to come.”—Julia Gaffield, Public Books

“A powerful account of the slave rebellion that took place in Jamaica in 1760 situates it in the context of an era of conflict and argues that slavery was itself a ‘state of war.’”—The Guardian

“Fascinating… A pathbreaking Atlantic analysis of the tricontinental wars that devastated West Africa and extended all the way to Jamaica. Its brilliant reconstruction of West African societies and their importance in the making of the prerevolutionary Greater Caribbean represents a historiographical turning point.”—Aline Helg, Atlantic Studies

“Brown at once provides what is surely the authoritative account of the 1760–1761 Jamaican uprising and makes a compelling case for recasting this and other such conflicts as fully-realized instances of Atlantic warfare… Brown makes his case magnificently.”—Ryan Hanley, Eighteenth-Century Studies

“Adds a new dimension to the study of Atlantic history that centers African people and forces readers to reckon with the primacy of violence in the creation and sustenance of Atlantic networks of trade, migration, and empire. It will surely be widely used by scholars and students of the history of the Caribbean, Atlantic world, and African diaspora.”—Rebecca Shumway, H-Net Reviews

“Groundbreaking and will undoubtedly affect several different fields of study… Brown’s argument for viewing the insurrections of 1760–61 as acts of war is extraordinary, transforming our thinking on violence within bondage from isolated events to a connected series of battles and engagements in this centuries-long transatlantic war against human bondage.”—Seth Whitty, H-Net Reviews

“Brown has produced the most detailed and insightful account to date of Tacky’s Revolt. By framing it through the wide-angle lens of imperial, Diasporic, and Atlantic historical forces converging in Jamaica during the Seven Years’ War and the zoom lens of colonial, local, parish, and plantation dynamics, the reader gets a detailed and personalized account of how enslavement functioned as a deadly and destructive act of war, and, just as importantly, of how resistance to slavery required a creative war to imagine if a different world was (and remains) possible.”—Matt D. Childs, Journal of Early American History

“Innovative and insightful, introducing readers to new ways of thinking about slave revolts and the Atlantic history of slavery… His cartographic methodology successfully poses exciting and thought-provoking questions that certainly expand how we understand slave revolt as a slave war… Has far-reaching implications for scholars of slavery, empire, and resistance and will prove to be of great value to a wide range of scholars.”—Clifton E. Sorrell III, Labour

“Intricately mapping each of the linked but local uprisings across Jamaica and relating them to tides in the global struggle, Brown demonstrates how the rebels applied strategic concepts mastered in wars an ocean away… He shows how they acted on motives and opportunities as global and complex as those of the military officers and planter militias who moved to contain and kill them… A tour de force of research, theory, and historical imagination that transforms anonymous laboring slaves into actors of tragic majesty in an intricate conflict.”—Christopher Moore, Literary Review of Canada

“Extraordinary… This well-written, beautifully illustrated, and incredibly well-researched book points the way forward toward a new cartography linking Europe, Africa, and the Americas and toward the future study of slave revolts and resistance.”—Gad Heuman, New West Indian Guide

“A finely crafted account of the micro and macro politics of slave resistance that will inform work in this field for some time to come.”—Christer Petley, Slavery & Abolition

“[A] careful reconstruction of an understudied footnote in Jamaican history.”—Alex Colville, The Spectator

“[A] revealing history… Readers interested in the era will find much of value in this exhaustive portrait of the rebellion’s origins and ramifications.”—Publishers Weekly

“This lively, sophisticated book proves that Vincent Brown is one of the most creative historians writing anywhere in the world today about the African Diaspora. Tacky’s Revolt is destined to become a classic work on the long, deep struggle against slavery from below.”—Marcus Rediker, author of The Slave Ship: A Human History

“The men and women who took up arms to fight against their enslavement across Jamaica in 1760 have long needed a historian. In Vincent Brown’s Tacky’s Revolt they have received their due. Combining precision with attention to the big picture, Brown weaves together stories of alliances, solidarities, and divisions, from St. Mary’s parish in the North of Jamaica, to the ships of the Atlantic ocean, to the forests of the Gold Coast. Brown’s superb archival work and sensitive historical reconstruction enable us to rethink the participants in the revolt as soldiers engaged in a war; a war against the unending, pervasive everyday violence that was slavery itself.”—Diana Paton

“In Tacky’s Revolt, Vincent Brown has mapped an innovative history and geography linking power and resistance across Africa, America, and Europe. He demonstrates that slavery was—is—a state of war.”—Catherine Hall, author of Macaulay and Son: Architects of Imperial Britain

“A masterful interpretation of the roots and routes of revolutionary action and of the inevitable response of African-Jamaican men and women to the violence of the racist and brutal British imperial project which rendered slavery a perpetual state of war.”—Verene A. Shepherd, author of Livestock, Sugar and Slavery: Contested Terrain in Colonial Jamaica

“The problem of understanding slave revolts is not why they were relatively few compared to the obvious difficulties of slave life, but why they happened at all. Vincent Brown has successfully worked out this rebellion by treating it as if it were a war, waged by ex-soldiers, chafing at their imprisonment, and looking for an avenue for freedom. Brown’s skillful linking of Tacky’s War to its African and Jamaican roots is an important venture in reconstructing the African Diaspora’s past.”—John Thornton, author of A Cultural History of the Atlantic World, 1250–1820

“Tacky’s Revolt reveals a truly transatlantic eighteenth-century world of resistance and warfare. Reframing a story often told from the perspective of European colonizers and American planters, Brown successfully places African soldiers at the core of the narrative. A truly masterful piece.”—Manuel Barcia, author of West African Warfare in Bahia and Cuba: Soldier Slaves in the Atlantic World, 1807–1844