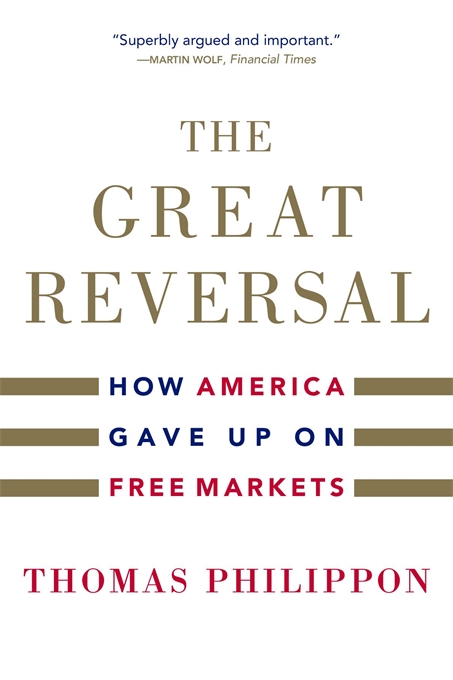 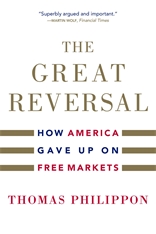 On APM’s Marketplace, listen to Thomas Philippon explain how increases in lobbying against competition and poor regulatory oversight led to higher prices for consumer goods and utilities in the United States compared to Europe—a complete reversal:

“Superbly argued and important… Donald Trump is in so many ways a product of the defective capitalism described in The Great Reversal. What the U.S. needs, instead, is another Teddy Roosevelt and his energetic trust-busting. Is that still imaginable? All believers in the virtues of competitive capitalism must hope so.”—Martin Wolf, Financial Times

“In one industry after another…a few companies have grown so large that they have the power to keep prices high and wages low. It’s great for those corporations—and bad for almost everyone else.”—David Leonhardt, The New York Times

“Argues that the United States has much to gain by reforming how domestic markets work but also much to regain—a vitality that has been lost since the Reagan years… His analysis points to one way of making America great again: restoring our free-market competitiveness.”—Arthur Herman, The Wall Street Journal

Why are cell-phone plans so much more expensive in the United States than in Europe? It seems a simple question. But the search for an answer took Thomas Philippon on an unexpected journey through some of the most complex and hotly debated issues in modern economics. Ultimately he reached his surprising conclusion: American markets, once a model for the world, are giving up on healthy competition. Sector after economic sector is more concentrated than it was twenty years ago, dominated by fewer and bigger players who lobby politicians aggressively to protect and expand their profit margins. Across the country, this drives up prices while driving down investment, productivity, growth, and wages, resulting in more inequality. Meanwhile, Europe—long dismissed for competitive sclerosis and weak antitrust—is beating America at its own game.

Philippon, one of the world’s leading economists, did not expect these conclusions in the age of Silicon Valley start-ups and millennial millionaires. But the data from his cutting-edge research proved undeniable. In this compelling tale of economic detective work, we follow him as he works out the basic facts and consequences of industry concentration in the U.S. and Europe, shows how lobbying and campaign contributions have defanged antitrust regulators, and considers what all this means for free trade, technology, and innovation. For the sake of ordinary Americans, he concludes, government needs to return to what it once did best: keeping the playing field level for competition. It’s time to make American markets great—and free—again.