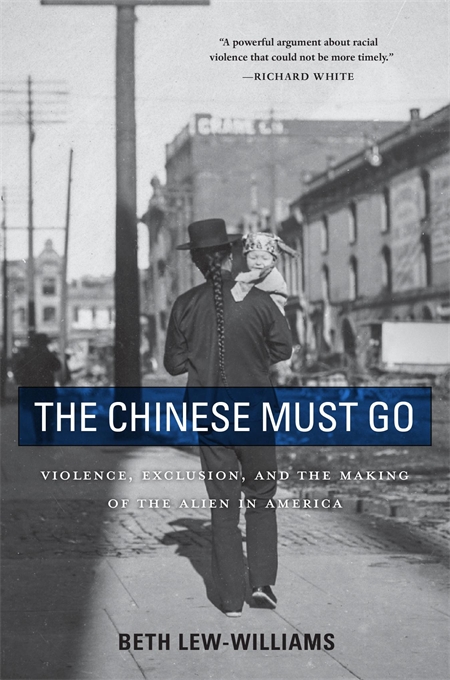 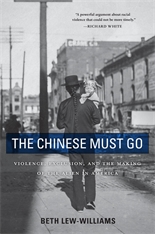 “A powerful argument about racial violence that could not be more timely.”—Richard White

“A riveting, beautifully written account…that foregrounds Chinese voices and experiences. A timely and important contribution to our understanding of immigration and the border.”—Karl Jacoby, author of Shadows at Dawn

“The Chinese Must Go shows how a country that was moving, in a piecemeal and halting fashion, toward an expansion of citizenship for formerly enslaved people and Native Americans, came to deny other classes of people the right to naturalize altogether…The stories of racist violence and community shunning are brutal to read.”—Rebecca Onion, Slate

The American West erupted in anti-Chinese violence in 1885. Following the massacre of Chinese miners in Wyoming Territory, communities throughout California and the Pacific Northwest harassed, assaulted, and expelled thousands of Chinese immigrants. Beth Lew-Williams shows how American immigration policies incited this violence and how the violence, in turn, provoked new exclusionary policies. Ultimately, Lew-Williams argues, Chinese expulsion and exclusion produced the concept of the “alien” in modern America.

The Chinese Must Go begins in the 1850s, before federal border control established strict divisions between citizens and aliens. Across decades of felling trees and laying tracks in the American West, Chinese workers faced escalating racial conflict and unrest. In response, Congress passed the Chinese Restriction Act of 1882 and made its first attempt to bar immigrants based on race and class. When this unprecedented experiment in federal border control failed to slow Chinese migration, vigilantes attempted to take the matter into their own hands. Fearing the spread of mob violence, U.S. policymakers redoubled their efforts to keep the Chinese out, overhauling U.S. immigration law and transforming diplomatic relations with China.

By locating the origins of the modern American alien in this violent era, Lew-Williams recasts the significance of Chinese exclusion in U.S. history. As The Chinese Must Go makes clear, anti-Chinese law and violence continues to have consequences for today’s immigrants. The present resurgence of xenophobia builds mightily upon past fears of the “heathen Chinaman.”