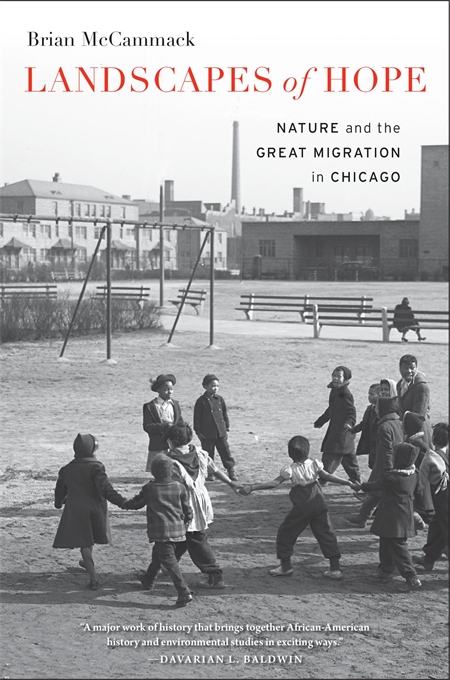 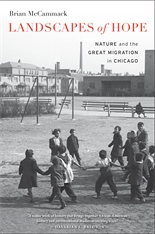 “The way nature helped African-Americans endure the segregated spaces they inhabited in and around Chicago forms the subject of Landscapes of Hope… If in the South nature was associated with labor, for the inhabitants of the crowded tenements in Chicago, nature increasingly became a source of leisure.”—Reinier de Graaf, New York Review of Books

“McCammack uncovers the untold history of African Americans’ migration to Chicago as they constructed both material and immaterial connections to nature… His attention to the complex landscapes that African Americans navigated is compelling.”—Teona Williams, Black Perspectives

“Anyone interested in the history of Black Chicago as well as the history of Chicago and the natural space in which the city was built and has existed for nearly two centuries will find the book filled with important information and telling insights.”—Patrick Reardon, Third Coast

“A major work of history that brings together African-American history and environmental studies in exciting ways.”—Davarian L. Baldwin, Journal of Interdisciplinary History

“McCammack’s book provides a literal landscaping of black modernity. In doing so, it shines new light on Black Chicago, forcing us to look again at things we thought we knew so well. Landscapes of Hope brings together environmental justice and African American history in new ways, reminding us that race must be central both to our debates about environmental injustice and to our general understanding of the environment itself.”—Davarian L. Baldwin, author of Chicago’s New Negroes

“Deeply researched and beautifully written, Landscapes of Hope shows how African American migrants to Chicago experienced, adapted to, and reshaped their new world. Through a close examination of African American life in the northern metropolis, Brian McCammack reveals an urban environment that was far more rich, varied, and dynamic than we had imagined, and one that was more than a mere stage for contests over jobs, housing, and political power. Rather, he demonstrates that African Americans’ efforts to claim urban space and enjoy the city’s outdoor parks, beaches, playgrounds, and nature preserves formed a vital element of their larger struggle for freedom.”—Andrew W. Kahrl, author of The Land Was Ours