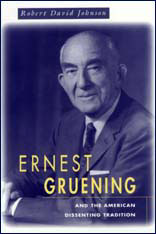 Ernest Gruening is perhaps best known for his vehement fight against U.S. military involvement in Vietnam, where he set himself apart by casting one of two votes against the Tonkin Gulf Resolution in 1964. However, as Robert Johnson shows in this political biography, it’s Gruening’s sixty-year public career in its entirety that provides an opportunity for historians to explore continuity and change in dissenting thought, on both domestic and international affairs, in twentieth-century America.

Gruening’s outlook on domestic affairs took shape in the intellectual milieu of Progressive-era Boston, where he first devoted attention to foreign affairs in crusades against aggressive U.S. policies toward Haiti and Mexico. In the late 1920s, he was appointed editor of a reform newspaper in Portland, Maine, and moved from there to The Nation. By the early 1930s he had built a national reputation as an expert on Latin American affairs, prompting Franklin Roosevelt to appoint him chief U.S. policymaker for Puerto Rico. In 1939, Roosevelt named Gruening governor of Alaska, where for fourteen years he played a key role in the political development of the territory. In 1958 Alaskan voters elected him to the U.S. Senate, where he articulated a dissenting outlook in inter-American affairs, foreign aid policy, and the relationship between the federal government, the economy, and the issue of monopoly.

Throughout his life, Gruening struggled to reconcile his ideological perspective, which drew on dissenting ideas long embedded in American history, with a desire for political effectiveness.