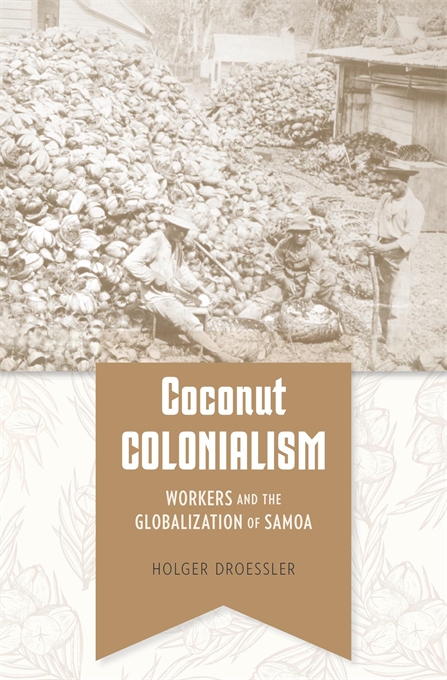 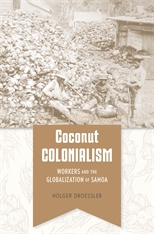 Workers and the Globalization of Samoa

A new history of globalization and empire at the crossroads of the Pacific.

Located halfway between Hawai‘i and Australia, the islands of Samoa have long been a center of Oceanian cultural and economic exchange. Accustomed to exercising agency in trade and diplomacy, Samoans found themselves enmeshed in a new form of globalization after missionaries and traders arrived in the middle of the nineteenth century. As the great powers of Europe and America competed to bring Samoa into their orbits, Germany and the United States eventually agreed to divide the islands for their burgeoning colonial holdings.

In Coconut Colonialism, Holger Droessler examines the Samoan response through the lives of its workers. Ordinary Samoans—some on large plantations, others on their own small holdings—picked and processed coconuts and cocoa, tapped rubber trees, and built roads and ports that brought cash crops to Europe and North America. At the same time, Samoans redefined their own way of being in the world—what Droessler terms “Oceanian globality”—to challenge German and American visions of a global economy that in fact served only the needs of Western capitalism. Through cooperative farming, Samoans contested the exploitative wage-labor system introduced by colonial powers. The islanders also participated in ethnographic shows around the world, turning them into diplomatic missions and making friends with fellow colonized peoples. Samoans thereby found ways to press their own agendas and regain a degree of independence. Based on research in multiple languages and countries, Coconut Colonialism offers new insights into the global history of labor and empire at the dawn of the twentieth century.