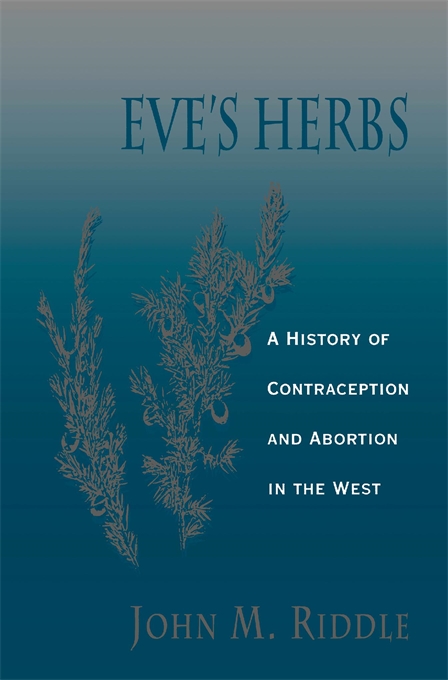 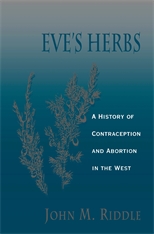 A History of Contraception and Abortion in the West

“Eve’s Herbs is a highly informative presentation of the history of the use of plant products, such as ergot, as abortion agents.”—Thomas Szasz, Washington Post

“John Riddle has established his reputation as a leading expert on ancient Greek pharmacology. In an earlier study, Contraception and Abortion from the Ancient World to the Renaissance, he argued that a much more reliable knowledge of oral contraceptives existed in the ancient and medieval worlds than had previously been thought. In this book, Riddle attempts a broader but partly overlapping study, a history of abortion and contraception in the Western tradition (Europe and the United States, with a glance at the Islamic World). More specifically, he challenges the common view that oral contraception was little practiced and largely ineffective until the 18th century… Riddle argues his case with learning and perspicacity. He draws widely on the specialist literature of a number of disciplines as he discusses, among other things, the theology of ensoulment of the fetus and the demographics of early modern Europe.”—Gary B. Ferngren, New England Journal of Medicine

“Dr. Riddle demonstrates, as in his earlier Contraception and Abortion from the Ancient World to the Renaissance, that knowledge about fertility control existed and women had access to it lost to them in modern times. Both pro-abortion and anti-abortion advocates will find these books important, instructive, and maybe prescriptive… A scholarly sleuth, Riddle permits historical texts to speak… Riddle integrates modern chemical, pharmacological, and medical confirmations that what the ancients said worked probably did.”—Journal of the American Medical Association

“Riddle’s work is a useful counterbalance to extreme skepticism about the pre-modern possibility of effective fertility control.”—Rebecca Flemming, Isis

“Riddle is a tireless scholar and an engaging writer, and as his story moves along in chronological order, it begins to read like an official history. But at heart Eve’s Herbs is just the opposite: a gathering of nervous confessions and forbidden secrets, committed to paper as proof of a hidden tradition. Like a covey of quail flushed from tall grass, these anguished facts burst from the page with startling life.”—Burkhard Bilger, The Sciences

“This fine scholarly book expands on Riddle’s previous work, Contraception and Abortion from the Ancient World to the Renaissance, to discover why and how women’s extensive knowledge and use of plants, herbs, seeds, bark, and roots was lost after the 19th century… Highly recommended for students of the history of medicine at all levels.”—A. R. Davis, Choice

“Riddle examines the use of plants as contraceptives, offering a fascinating view of the early knowledge of reproduction and attempts to regulate it.”—Library Journal