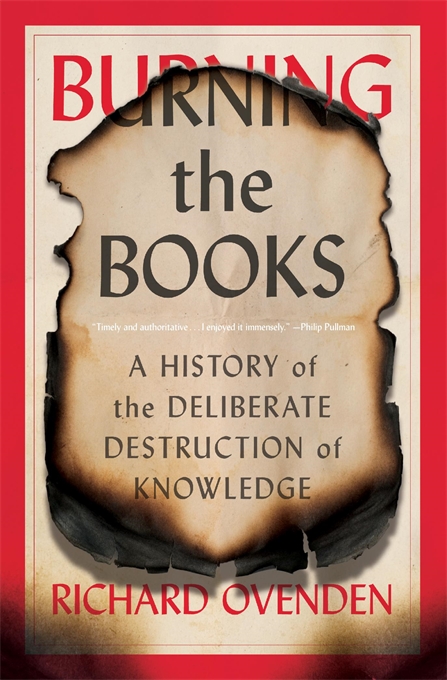 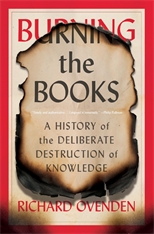 “[Ovenden] is acutely aware of the many ways in which books and paper archives cease to exist: not only through deliberate destruction—acts of moral outrage, retribution, even efforts to literally erase history—but also simple neglect… Fortunately, he has devoted a great deal of time to thinking about these disasters and how to prevent them. His compelling thoughts are now gathered in the eminently readable (and provocatively titled) Burning the Books… Essential reading for anyone concerned with libraries and what Ovenden outlines as their role in ‘the support of democracy, the rule of law, and open society.’”—Ernest Hilbert, Wall Street Journal

“Present-day anxieties confer unwelcome relevance to Richard Ovenden’s Burning the Books… [He] emphasizes that attacks on books, archives and recorded information are the usual practice of authoritarian regimes. Control what people know and you control them; control the past and you control the future… Ovenden argues that libraries should be used to safeguard our digital data, so that the powerful don’t simply delete anything they don’t like or wish to repudiate.”—Michael Dirda, Washington Post

“When people burn books, they are doing more than attacking words on paper. They are attempting to destroy the record of a people’s past and, through that, their right to be present… It is tempting to think the danger of literature erasure is now behind us because we can store it all digitally. This, Ovenden says, is mistaken. Digital records are fragile… This book should stir us to thinking and to action—against censorship, against careless loss, and for the preservation of the memory of where we came from and of our right to be where we are.”—Michael Skapinker, Financial Times

“The sound of a warning vibrates through this book… Takes a nightmare that haunts many of us—the notion of the past erased—and confirms that it is no fiction but rather a recurring reality. In the process, Ovenden stays true to his calling, reminding us that libraries and librarians are the keepers of humankind’s memories: without them, we don’t know who we are.”—Jonathan Freedland, The Guardian

“Whether we are looking at history ancient or modern, the wicked behavior is the same. And those seeking to destroy accumulated knowledge do not only deploy violent methods. One of the subtle themes in the book is how long-term destructive behavior toward learning and knowledge manifests itself—not as book-burning so much as a slow and metaphorical burn. Ovenden describes cases of the destruction of knowledge due to gradual organizational neglect; a ‘lack of oversight, leadership, and investment’; and the ‘underfunding, low prioritization, and general disregard for’ institutions that preserve and share knowledge—savage indictments of a kind of bureaucratic destruction that read like office memoranda from the present day.”—Peter B. Kaufman, Los Angeles Review of Books

“A superb book… A history of destruction, not by accident, but by acts of erasure. The villains in the long history of malice toward knowledge include authoritarian governments, dogmatic religions, and a blind know-nothingness that tramples on what it does not understand… Not only a work of history, but a clarion call for those who love books and obsess over their survival.”—Thomas Filbin, Arts Fuse

“[A] rich and meticulous 3,000 year history of knowledge and all the ways it may be preserved (or not)… Written at a time of huge political and economic strife, attempts to save the concept of the library itself, something it achieves not through polemic…but by telling stories… As Ovenden quietly notes, archives are central to social order, to the ordering of history, and to the expression of national and cultural identity.”—Rachel Cooke, The Observer

“For Ovenden, the imperative to preserve libraries draws moral force from the memory of oppressors who have tried to obliterate all memory of the oppressed… The keeping of records remains itself a kind of warfare. The keepers, whether they wish so or not, cannot be neutral.”—Elyse Graham, Public Books

“From arson to neglect, from state censorship to corporate digitization, Ovenden provides a sweeping tour of the vulnerabilities that affect whole libraries even more than the sum of their bookish parts.”—Leah Price, Public Books

“Chronicles how libraries have served as sanctuaries for knowledge under constant threat, and what that means for the present and the future… Shows that when knowledge in print is threatened by power, it’s people pledged to the printed page, rather than armies, who step in… Made clear to me just how vulnerable libraries really are. When we don’t properly fund them, we risk lies becoming the truth, and the truth becoming a joke.”—Slate

“Shows just how vulnerable archived knowledge is, from the pile of 28,000 clay tablets rescued for the British Museum from Ashurbanipal’s library, destroyed by conquerors of Nineveh in 612 BC, to the deletion of millions of photos from Flickr accounts in 2019.”—Christopher Howse, The Telegraph

“Vibrant societies build libraries; declining societies close them… It’s no longer necessary to burn a library; the same effect can be achieved through systematic use of the ‘delete’ key… Ovenden argues that only libraries can be trusted to preserve the inconvenient truths that lurk on the internet… A passionate and illuminating account of the obliteration of knowledge that has occurred over the past three millennia… This splendid book reveals how, in today’s world of fake news and alternative facts, libraries stand defiant as guardians of truth.”—Gerard DeGroot, The Times

“Burning the Books at once provides a striking reminder of the necessity of such places for social well-being, along with a kind of love letter to some of the best librarians history has to offer… Ovenden’s volume is an unambiguous reminder of the risks specific individuals took to ensure the survival of written knowledge… Throughout Burning the Books, we are clearly in the hands of someone who has devoted his life to preserving the written word, and we can only hope that individuals like Ovenden will receive the necessary support in order to continue to resist ‘the long history of attacks on knowledge’ that he chronicles.”—Daniel Diez Couch, American Literary History

“Ovenden writes with a sense of urgency. Libraries and archives are under assault today, he argues, and our complacency is leading to alarming levels of reduced resources for our ‘storehouses of knowledge.’… A call for renewed support for memory institutions, specifically increased funding for digital preservation projects… He joins other library directors at prestigious institutions who are working hard to combat the false idea that libraries and archives are irrelevant in the digital world.”—Jason Dyck, College & Research Libraries

“There could never be a more relevant time for the publication of Burning the Books: A History of the Deliberate Destruction of Knowledge. ‘Democratic institutions, the rule of law and open society are under attack. The truth itself is under attack,’ author Richard Ovenden predicts with chilling accuracy months before the invasion of the U.S. Capitol by rioters… It is an history of the disrespect shown to libraries throughout the ages, and a treatise on why we must strive to protect and preserve them… There is something for everyone who loves libraries in this book… Ovenden lists the crucial role libraries and archives have played throughout history and what is lost when they are destroyed.”—Gretchen Webster, Publishing Research Quarterly

“A wide-ranging and thought-provoking account of efforts to destroy, neglect, or conceal books, archives, private papers, government documents, and other records… Even more troublesome, according to Ovenden, are the vast quantities of information currently held at the whim of a few global tech giants… An engrossing and informative portrait of how important it is to preserve and protect knowledge.”—Publishers Weekly

“A stark and important warning about the value of knowledge and the dangers that come from the destruction of books. Vital reading for this day and age.”—Peter Frankopan, author of The Silk Roads

“Like an epic filmmaker, Richard Ovenden unfolds vivid scenes from three millennia of turbulent history and closes in to mount passionate arguments for the need to preserve the records of the past—and of the present. In the current changing landscape of knowledge and power, this urgent, lucid book calls out to us all to recognize and defend one of our most precious public goods—libraries and archives.”—Marina Warner, President of the Royal Society of Literature and author of Stranger Magic: Charmed States and the Arabian Nights

“This isn’t about burning books at all, but saving them. This is a call to arms by the guardian of one of the greatest libraries in the world and the custodian of millions of books.”—Christopher de Hamel, author of Meetings with Remarkable Manuscripts

“The era of fake news and alternative facts reminds us that the burning of books is about much more than matches and accelerants; it is about power. Even as the digital world offers ways of sharing and preserving knowledge, it gives would-be biblioclasts fresh options for destruction, new instruments for erasure. Burning the Books arrives at a crucial juncture. With historical breadth, narrative focus, and the capacious sensibility of a keeper of books, Richard Ovenden catalogues the destruction of knowledge and memory—not only archiving the episodes, but offering schema for comprehending the losses and defending the stacks of the future.”—Matthew Battles, author of Library: An Unquiet History

“From ancient Nineveh to medieval Glastonbury, from Sarajevo after World War II to the cloud, men and women have found ways to destroy books and documents—and to preserve them. This lively, richly detailed book by the keeper of one of the world’s greatest libraries evokes both the magic and the meaning of these records of destruction and preservation, and makes a powerful case for the signal importance of libraries in the digital age.”—Anthony Grafton, author of Inky Fingers: The Making of Books in Early Modern Europe

“Burning the Books is both timely and authoritative. The subject of archives and libraries is one of permanent importance in the understanding a nation has of itself, and touches not only high politics but also information technology and life-and-death drama. I can think of no one better qualified to write about it than Richard Ovenden, whose great knowledge and wide experience is expressed in a clear and lively style.”—Philip Pullman

“‘Dangerous souvenirs’ is what Richard Ovenden calls the books salvaged by ex-monks under the nose of Henry VIII. Now as then, books need friends. This fascinating book will help to find them.”—Alan Bennett

“A magnificent book—timely, vital, and full of the most incredible tales. A manifesto for our humanity and its archives.”—Philippe Sands, author of East West Street