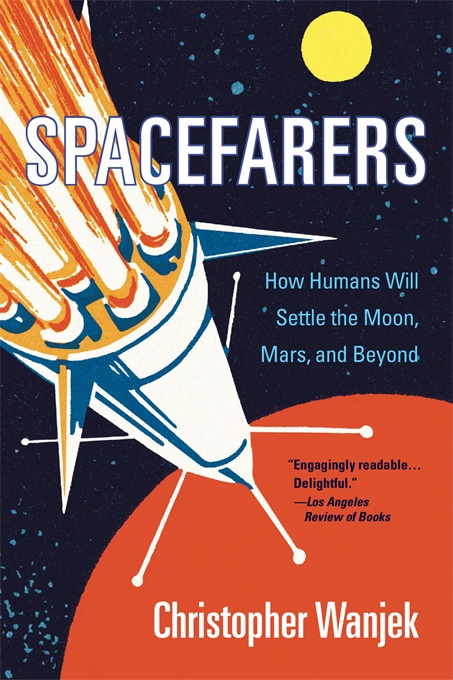 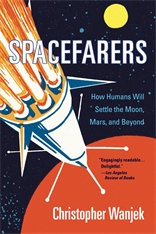 “Nerdily engaging (and often funny)… Technology and science fiction enthusiasts will find much here to delight them, as Wanjek goes into rich detail on rocketry and propulsion methods, including skyhooks and railguns to fling things into orbit, or maglev trains running around manmade orbital rings… He is a sensible skeptic, yet also convinced that, in the long run, our destiny is among the stars.”—The Guardian

“Wanjek’s analysis of the commercial approach to space exploration adds an important perspective to the conversation about our future in space.”—Science

“If the events of this year have had you daydreaming about abandoning the planet entirely, [Spacefarers] is a geekily pleasurable survey of the practicalities and challenges… This book should be given to all prospective space cadets.”—The Telegraph

“A fascinating read for anyone interested in the practicalities of living away from Earth, and describes just how engineers, scientists and entrepreneurs are planning to expand humanity’s horizons.”—Paul Sutherland, BBC Sky at Night

“Of interest to anyone curious about space travel and the (possible) human colonization of outer space.”—M. A. Orthofer, Complete Review

“Wanjek takes an optimistic look towards humanity’s future in space—not only on the Moon and Mars, but also on the asteroids and beyond… The great thing about this book is its balance between optimism and realism, between respect and frivolity.”—Mark Williamson, E&T

“Charts the way to an intriguing, not-too-distant future… Though the childlike wonder that took ahold of Americans during the Apollo era seems gone, Spacefarers suggests that a future in space is within reach, inspiring wonder in an age of skepticism.”—Foreword Reviews

“A welcome and timely addition to synoptic views of the future of human space exploration… Offers a solid basis to inform what is becoming an increasingly vital debate on the use and international deployment of space technologies.”—Lewis Pinault, Observatory

“Drawing on the science and history of space exploration, Wanjek paints scenes of future human activity across the solar system.”—Maria Temming, Science News

“Wanjek walks the reader through a realistic, scientific description of how humans could live enduringly in space in his engaging and informative book.”—Lt. Col. Christopher Mulder, Strategic Studies Quarterly

“Wanjek’s engaging style makes this a must-read for space enthusiasts, and for anyone who ponders our place in the universe.”—Choice

“Wanjek addresses the challenges and possibilities of living in space in this inquisitive work… [He] opens up many intriguing possibilities in this wide-ranging survey.”—Publishers Weekly

“This book offers a witty yet in-depth exploration of the prospects for human habitation beyond Earth. Christopher Wanjek takes us on a bones-to-brain tour of human anatomy and psychology under extreme living conditions, from orbit around Earth to the far reaches of the solar system. Spacefarers is accessible, authoritative, and in the end, inspiring.”—Richard Panek, author of The Trouble with Gravity: Solving the Mystery Beneath Our Feet

“Is our solar system the new frontier? In Spacefarers, you’ll learn about a range of obstacles that make it more daunting to explore space than sea or sky. And yet, as Wanjek notes, we seem up for the challenge.”—David Brin, astrophysicist and author of Existence and The Postman

“Wanjek gives readers a detailed and pragmatic look at living in space. Spacefarers explores not only the science and technology behind space travel, but also the economic, legal, and psychological challenges that await us.”—Isaac Arthur, host of Science & Futurism with Isaac Arthur

“Spacefarers delves into the past, present, and future of space exploration in a way that really lets you picture what’s possible, in all its mind-boggling glory.”—Maren Hunsberger, science communicator

“Spacefarers is the best book I’ve read on space exploration since Isaac Asimov. When I came of age in the 1960s, talk of colonizing the moon and Mars was as common as it was inspiring. But as the decades pass, it seems to be a goal that is still ten years away—and always will be. Why? As Christopher Wanjek reveals in this captivating read, the obstacles multiply, politically and scientifically, but that doesn’t mean that we cannot overcome them.”—Michael Shermer, publisher of Skeptic magazine and author of The Moral Arc and Heavens on Earth