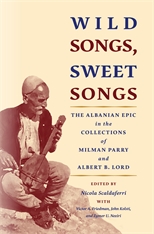 Publications of the Milman Parry Collection of Oral Literature 5

The Albanian Epic in the Collections of Milman Parry and Albert B. Lord

With Victor A. Friedman

In the 1930s, Milman Parry and Albert B. Lord, two pioneering scholars of oral poetry, conducted adventurous fieldwork in the Kingdom of Yugoslavia and northern Albania, collecting singularly important examples of Albanian epic song. Wild Songs, Sweet Songs presents these materials, which have not previously been published, for the first time.

Nicola Scaldaferri and his collaborators provide a complete catalogue of the Albanian texts and recordings collected by Parry and Lord; a selection of twelve of the most significant texts, including the longest Albanian epic ever collected, in Albanian with accompanying English translations; four essays contextualizing the materials and outlining their significance; and an assortment of related photographs and documents. The book is an authoritative guide to one of the most significant collections of Balkan folk epic in existence.