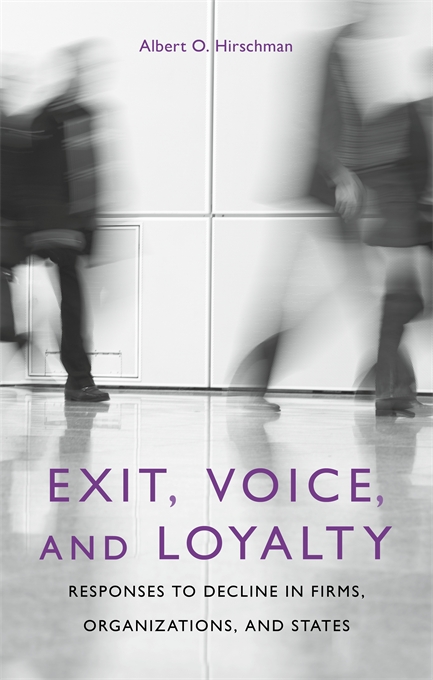 An innovator in contemporary thought on economic and political development looks here at decline rather than growth. Albert O. Hirschman makes a basic distinction between alternative ways of reacting to deterioration in business firms and, in general, to dissatisfaction with organizations: one, “exit,” is for the member to quit the organization or for the customer to switch to the competing product, and the other, “voice,” is for members or customers to agitate and exert influence for change “from within.” The efficiency of the competitive mechanism, with its total reliance on exit, is questioned for certain important situations. As exit often undercuts voice while being unable to counteract decline, loyalty is seen in the function of retarding exit and of permitting voice to play its proper role.

The interplay of the three concepts turns out to illuminate a wide range of economic, social, and political phenomena. As the author states in the preface, “having found my own unifying way of looking at issues as diverse as competition and the two-party system, divorce and the American character, black power and the failure of ‘unhappy’ top officials to resign over Vietnam, I decided to let myself go a little.”