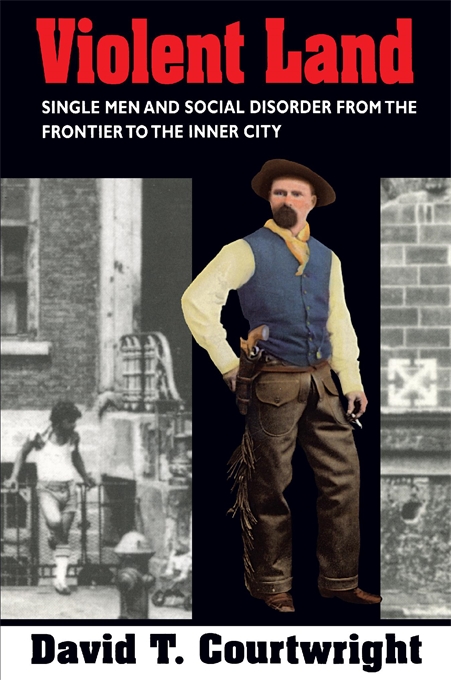 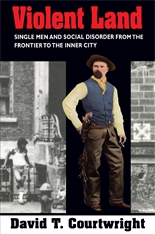 “America is the Jekyll and Hyde of nations. Our streets are paved with gold and slick with blood. We enjoy liberty to an unparalleled degree, yet a hefty percentage of our citizens languish in jail cells… David T. Courtwright, professor of history at the University of North Florida, explores the dark half of this national split personality in his incisive and frightening Violent Land.”—Philip Zaleski, Village Voice

“[Courtwright] writes well, and successfully marshals evidence from sociobiology, population and quantitative history; his synthesis of such factors as testosterone, gender ratios, marriage markets and honour in a broader understanding of American violence is exemplary and accessible… [A]n important addition to a growing shelf of recent books on American (and, increasingly, global) violence.”—J. David Slocum, Times Literary Supplement

“David Courtwright’s study of violence in America is just too interesting and readable to gather dust as another academic treatise. Violent Land…boldly crosses academic boundaries probing for the truth about violence in America from a number of angles. In the end, Courtwright finds biological, demographic, cultural, and social explanations for why America has been, and continues to be, a violent land. Courtwright examines three questions—two obvious enough, and a third that sets the stage for his quite original insights and the more compelling arguments in his book: Who has been responsible for American violence? Why has there been so much of it? And why has it been so unevenly distributed?”—Gregory M. Lamb, Christian Science Monitor

“Linking the violent past of the western frontier to the violent present of the inner-city ghetto has long been an intriguing idea, but until this original and provocative book it was no more than that… Mr. Courtwright wears his learning lightly in Violent Land, which is written with verve, narrative power and storytelling appeal… [This is a] powerful diagnosis firmly grounded in historical depth, perceptive interpretation, social wisdom and engaged but rigorously controlled scholarship.”—Richard Maxwell Brown, Washington Times

“Every policy maker and elected official who is interested in better understanding violence in America and particularly in our cities should read Professor Courtwright’s book… It is thoroughly interesting reading.”—R. Gil Kerlikowske, Buffalo News

“David T. Courtwright has written a lucid, cogently argued history of violence in the United States from the early nineteenth-century frontier to the present. His book is a model of social science history, with carefully explicated hypotheses and clearly presented evidence and arguments. It should find a place on any graduate or undergraduate seminar table, where it is guaranteed to spark debate… Courtwright is to be commended for raising important issues about the nature of violence in American society, and his book deserves to be widely read and debated.”—Eric C. Schneider, American Historical Review

“This is an ambitious book that tackles a very large and important question, one that has been neglected by historians—the high levels of violence engaged in by American males… Courtwright is to be commended for recognizing this as a serious question for American historians and for bringing to it a multidisciplinary approach… Courtwright has included rich insights and research from the fields of psychology, sociology and biology, among others.”—Altina L. Waller, American Journal of Legal History

“In Violent Land, the author takes a long view of violence in American history, examining social disorder from the colonial period through the present. He does so by asking three broad questions: ‘Who has been responsible for it? Why, relative to other nations, has there been so much of it? And why has it been so unevenly distributed?’ …The resulting narrative, as befits his approach, is broad, sweeping, and provocative… Courtwright’s work is a model interdisciplinary study, and though some of his statements and conclusions may be controversial, his work deserves the widest possible reading.”—Mark A. Eifler, The Historian

“Professor David T. Courtwright has produced a fascinating, important, and impressive study of violence in the American past. His approach is innovative and his methods creative. The book examines the recurring problem of violence in American history and argues, compellingly, that violence has most often been associated with young unmarried males who find themselves thrust into pockets of society in which males significantly outnumber females. Unrestrained by marriage or family life, these males succumb to the violent propensities inherent in both their age and their gender… This book will be a lasting and valuable contribution to the study of violence in America… [It] is a significant and praiseworthy achievement.”—Glenn Feldman, Southern Humanities Review

“Whether in the cowboy bunkhouse of the last century or the gang crack-house of this one, young men have often wielded guns and knives to deadly effect. Documenting this male violence requires scholarship; explaining it requires cultural insight. Courtwright combines both in a work of compelling timeliness, showing that the same kind of male aggressiveness that once flared into brawls in Dodge City and Abilene is now erupting in the form of drive-by shooting in our inner cities… No one who cares about America’s future can ignore Courtwright’s disturbing thesis.”—Booklist

“Timely, rich, and surprisingly nimble, Courtwright’s orderly examination of patterns of violence and disorder in American history ranges from the ‘passing migratory anomalies’ that created the cultural ecology of the frontier to the critical collapse of familial mechanisms of social control in the inner city of today… An authoritative contribution.”—Kirkus Reviews