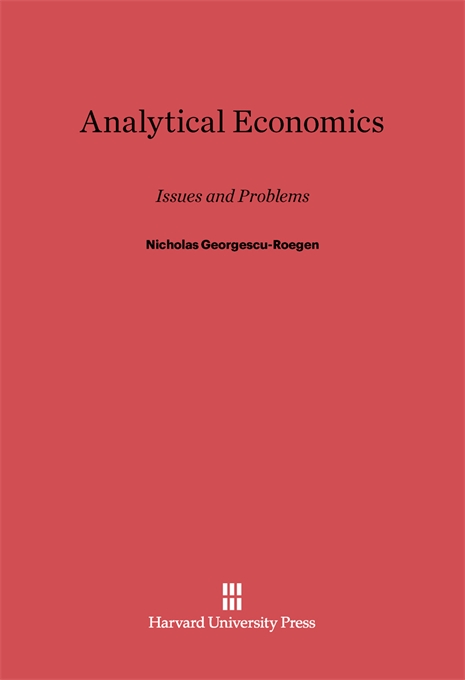 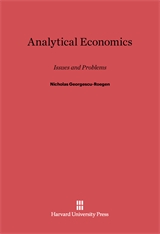 Nicholas Georgescu-Roegen undertakes to answer the question, “What kind of science is economics?”

The book contains twelve of Georgescu-Roegen’s most influential essays, mainly on consumer behavior, production, and economic development, the earliest essay dated 1935, the latest 1960. And he has given these writings additional meaning with a major introductory essay entitled “Some Orientation Issues in Economics.” This profound new essay is a philosophical feat, a book in itself. Its five chapter titles give an idea of its scope: “Science: A Brief Evolutionary Analysis,” “Concepts, Numbers, and Quantity,” “Some Object Lessons from Physics,” “Evolution versus Mechanics,” and “General Conclusions for the Economist.”

The author argues that the economic process is not a mechanical phenomenon, cannot be reduced to mechanical equations, and cannot be understood without the concepts of purposive activity and enjoyment of life. The study of this process cannot be built on what he calls “arithmomorphic” concepts—i.e., discretely distinct propositions holding true in all times and places. Instead it depends on “dialectical” concepts, not in the Hegelian sense but in the sense of being surrounded by penumbras and overlapping with their opposites. For these reasons Georgescu-Roegen maintains that economics is not a “theoretical” science. But he insists that correct reasoning with dialectical concepts is not impossible. Indeed, no science can completely avoid them.

Arithmomorphic models, too, are indispensable in any science, including economics, but in economics they seldom represent accurate blueprints. Instead, they are analytical similes by which we can test or illustrate our dialectical reasoning. As Georgescu-Roegen puts it, “there is a limit to what we can do with numbers, as there is a limit to what we can do without them.” These ideas not only are stated explicitly in the introduction but run like threads through the reprinted essays. In both the new essay and Part IV of the book, for example, he criticizes the notions—current in the theories of economic development—that machines develop man, not vice versa, and that one and the same “economic theory” is valid for all societies.

Among the novel contributions of the introduction is an analysis of the entropic, unidirectional character of the economic process. The Entropy Law, he says, is “the most economic in nature of the physical laws.”