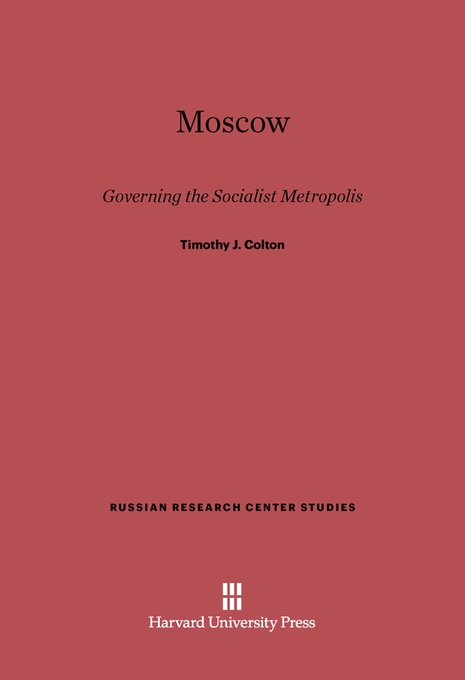 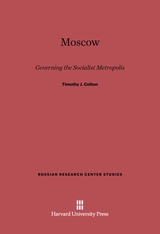 “A sprawling, affectionate history of who governed the socialist metropolis, and how they did…a lively, judicious analysis… [Colton’s] felicitous phrases shine like polished onion domes amid concrete-block high-rises. Startling revelations fall thickly and accumulate… Timothy J. Colton has given us a blueprint for reading the contemporary capital, superbly demonstrating the depth of the Soviet-era contribution to the ancient city’s outer face and inner structure.”—Stephen Kotkin, The New York Times Book Review

“[An] important book… [Colton] gives us an encyclopedic account of how the ‘socialist metropolis’ was governed from the Bolshevik seizure of power in 1917 to the victory of the ‘democrats’ in 1990… [The author takes] seriously two things that the dominant social approach to the Soviet experiment largely neglects: the party and socialism.”—Martin Malia, The Washington Post Book World

“Truly [this] is a grand history of one of the world’s ancient and great cities, and, for that, it is also a major modern contribution to the field of urban history. More significantly, however, by digging so deeply into the history of Moscow under the tsars, the communists, and the current rulers, Colton has created an important angle on modern Russian history. This is Russia’s story from the bottom up, merging political with social history.”—Foreign Affairs

“Colton’s is a model narrative. A city emerges from it, at once vital and deeply damaged, more at the mercy of ideologues and fanatics than any other comparable settlement in this century (more, for example, than Rome or Berlin), yet resistant to them because its people could not in the end be marshalled into the plans.”—John Lloyd, London Review of Books

“Here is a blockbuster of a book, massive in its exploration of the fluctuating fortunes of a capital city long associated with Stalin’s urban massif of crenellated ‘frosted wedding cakes’ in concrete and steel, yet also the home of the Kremlin, Red Square and St Basil’s Cathedral. This juxtaposition is…sufficient for Timothy J. Colton not only to regard Moscow as unique but also to embark on an astonishingly detailed and wholly absorbing investigation of what this meant in the past and what present changes mean for Moscow and for truncated Russia… [A] monumental and absorbing study, furnishing rich material for the historian, erstwhile Sovietologist, demographer, architect and well-tempered traveller.”—John Erickson, The Times Higher Education Supplement

“A short review can hardly do justice to the richness of this work. It stands as a testimony to scholarship of the highest order.”—Richard Sakwa, Labour History Review

“[Colton’s] writing reflects a significant amount of original research—documents from the Moscow Party and city archives, contemporary press accounts, oral histories and surveys—as well as a mastery of current and past scholarship… [His] approach is laudable. Colton pulls together disparate topics, those subjects which are often treated by other scholars as if they have not relation to each other… One of Colton’s triumphs is that he rescues architecture and urban planning from the purview of aesthetes, charting how successive regimes attempted to use Moscow’s built environment as a tool in creating the socialist metropolis… Moscow is a welcome addition to the ever-expanding scholarship of Soviet history and serves as a helpful reference book.”—Bay Brown, The Moscow Times

“Moscow had a very different fate this century, as is documented in Timothy Colton’s exhaustively researched tome. A powerfully, assertive Soviet Union rose from the ashes of the Russian Empire, and Moscow was its capital. Colton provides a thorough social and political history of the city’s rise, with useful maps and illustrations. The book is a mine of information that regular visitors of Moscow will quarry with pleasure… The book, like the city it documents is huge, a monumental history of a monumental city.”—Peter Rutland, National Interest

“From personal interviews to published memoirs, from newspapers to statistical surveys, from official documents to literature, Colton has made good use of them all. Furthermore, he openly admits having received invaluable input from some of the finest minds in academia, and his acknowledgements section reads like a ‘who’s who’ of international sovietology. The list includes scholars who have also produced urban histories, but what is most significant about the roster is that it includes representatives from many different disciplines. This point not only highlights the inter-disciplinary nature of Colton’s work, but also the fact that his book should be of great interest to people outside the history departments of the world. To put it most simply, this ‘city biography’ contains something for almost everyone.”—Urban History Review

“Colton has written a faithful chronicle of Moscow from revolution (1917) to revolution (1989), adding a historical prefix and postscript for both fleshing out a comprehensive biography of the city… There is no comparable work, let alone one that uses the newly accessible people and documents Colton has so successfully mined… None match Colton’s Soviet-period detail and analytic insight… The book is essential for any academic library.”—Choice