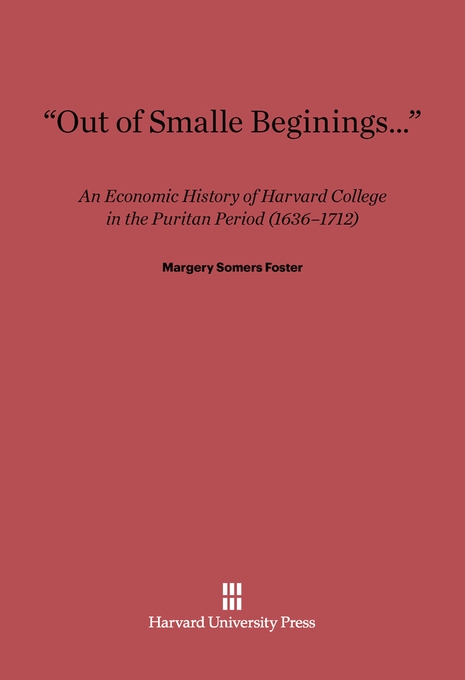 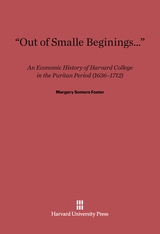 “Out of Smalle Beginnings…”

With its pleasant perspective on the American past, this book is a relevant document for higher education today. Government aid to universities, for example, has an early precedent in the grant of “£4OO towards a schoale or colledge” by the Massachusetts Bay Colony in 1636. This is the first recorded notice of the institution which was to become Harvard University, and significantly, Margery Somers Foster comments, “it is a notice concerned with finance.”

Harvard College in the seventeenth century was one of America’s largest and most continuous economic enterprises. Its financing is a record of resourceful extemporization. Harvest time was a period for paying bills with corn or wheat made legal tender at varying rates. How the College looked upon “country pay” or “commodity money” may be understood in the phrase, “Cash received…Should be £5 per annum, but, being paid in money, £4 accepted.” And “bookkeeping barter,” in which one commodity was traded for another rather than used directly as money, might involve the College in accepting a cow for tuition: Harvard does not want the animal, but the College is in debt to someone who can use the cow.

Obtaining funds from what was at first hardly more than a subsistence economy, the College attempted to derive from them some reliable income. The instability, as well as the inadequacy, of investments necessitated repeated community support. One of the most important gifts was the “College corn”—the “fourth part of a bushell of Corne, or somethinge equivalent thereunto,” given yearly by every family in New England, “which is able and willing,” for scholarship assistance to “poor, pious, and learned” students. Another source of income came from the receipts of the ferry running between Charlestown and Boston; between 1640 and 1712 this operation contributed over three thousand pounds to the College, although some of the money received was “bad” or counterfeit wampum. By 1712 the growing endowment income had significantly stabilized and improved the running of the College.

Though seventeenth-century Harvard was tiny compared with modern colleges or universities, it was proportional in its size to the population of its time, and its economic influence in the community was at least as important as that of present-day educational institutions. Foster’s study is a significant contribution to economic and business history. Using the long and detailed financial reports she has made for the College she is able to illustrate the behavior of money (or lack of money) and prices when America was at the beginning of its economic development. Her “historic multiplier” allows real values—such as the faculty salaries of Colonial Harvard—to be compared with those of today.