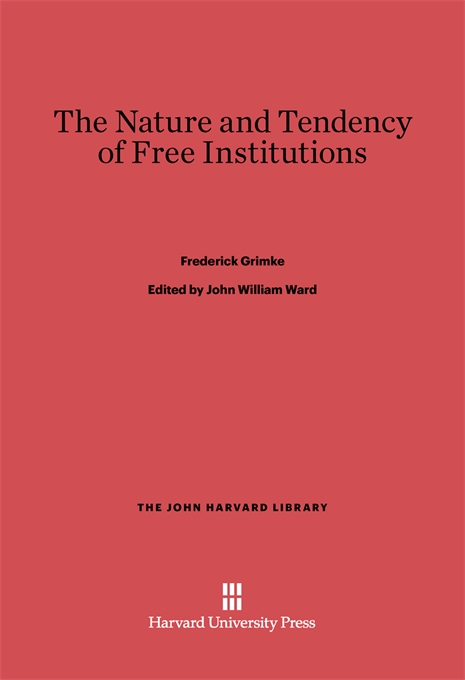 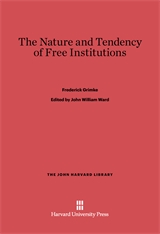 The Nature and Tendency of Free Institutions

First published in 1848, Frederick Grimke’s book, in the words of the editor, “deserves comparison with Tocqueville’s justly famous work, Democracy in America, and is in certain ways superior. It is the single best book written by an American in the nineteenth century on the meaning of our political way of life.” A second edition of Grimke’s work was published in 1856, and a third edition appeared posthumously in 1871, but since then this classic in American thought has been almost completely lost to sight.

Grimke was born in South Carolina in 1791, and later moved to Ohio where he became a judge. He remained a bachelor, led a rich and cosmopolitan intellectual life, and accumulated an excellent library. His sisters Angelina (wife of the abolitionist Theodore Weld) and Sarah were both famous for deserting their South Carolina heritage and becoming active in the abolition and woman suffrage movements. In 1842 Grimke retired from the bench to devote the remainder of his life to study and writing, setting himself the task of educating his contemporaries in the nature of their society. His major achievement was The Nature and Tendency of Free Institutions.

Grimke’s range of topics includes the right of the majority, the character and operation of elective governments, the function of political parties, the American contrasted with the English and French constitutions, and the separation of powers in the American political systems. He sees governmental institutions as the expression of the general structure of society which calls them into being. In his Introduction, Mr. Ward points to Grimke’s thesis “that the separation of powers in the frame of the American constitution works not because power is distributed within the government but because all branches of the government are, directly or indirectly, responsible to the will of the majority of the people outside the doors of government.” As a result of the party system, Grimke wrote, “we may vary the paraphernalia of government as much as we please, but it still obstinately persists in every one of its departments to be a government based upon the popular will.”

Mr. Ward calls attention to Grimke’s passionate belief that “freedom is its own justification” and that its ultimate value is that “it created the kind of character which made freedom possible.” He held that "the only way to make a man fit for freedom is to give him freedom.” Yet, unlike his sisters, he shared a view of race that was pervasive in his time and was unable to imagine the extension of freedom to the slave. In contradiction to his views of government and freedom, he upheld Negro slavery even to the extent of sanctioning secession to protect it. To him, “the open affirmation of the right of secession would serve to maintain the Union, not destroy it.”