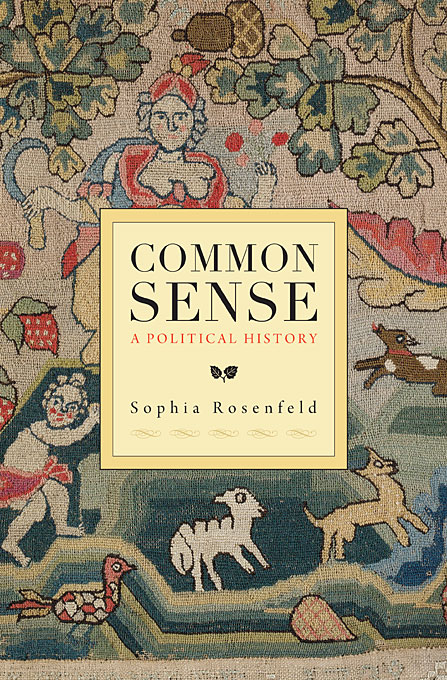 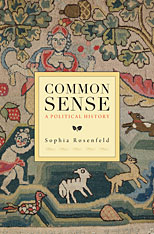 “Rosenfeld seeks to explain how the ‘common sense’ of the people became a touchstone of political wisdom and a ubiquitous catch-phrase in political debate across the Western world… Rosenfeld is a shrewd and inventive historian. She has excavated the rhetoric of common sense from an impressive number of sites and has shaped this diverse evidence into a smart and plausible narrative. She writes with verve… Rosenfeld warns us that common sense is sometimes just an honorific that we bestow upon our prejudices.”—Jeffrey Collins, The Wall Street Journal

“As Sophia Rosenfeld emphasizes in her illuminating new book, Common Sense: A Political History, the concept actually belongs to the realm of propaganda, power, and protest. Over the centuries, the appeal to the unerring, intuitive, and shared knowledge of average people has been the rhetorical tool of populist movements on the left as well as on the right. A claim to possess the common sense about a matter rarely ends a debate; more often it has acted as a pivot for violent disagreements as each side mobilizes its version of self-evident truth… The diligent reader is rewarded with keen insights into how the belief in plain people’s access to truth has contributed to demolishing established forms of authority—whether law, tradition, or faith.”—Susan Dunn, The American Prospect

“We often hear politicians and pundits speak of ‘common sense.’ Now Rosenfeld insightfully traces the turns the phrase has taken since it came into use in 18th-century urban centers… Her book is a model of how a fine work of history may enlighten readers about polemics without being a polemic itself. Rich, graceful, often witty, this is very highly recommended.”—Bob Nardimi, Library Journal

“The idea of common sense pops up in many different guises throughout modern history, and one of Rosenfeld’s more interesting points is that it is hardly ever utilized the same way twice… Rosenfeld rightly points out that common sense is most often utilized against some sort of Other, with politicians touting their own sensible ideas against some sort of radical, extreme ideology, whether that be liberal or conservative. In bringing the power of the vote to the people, democracy has also ensured that politicians must convince the people that they’re just another one of the folks… From the populist demagoguery of the Tea Party to the social leveling provided by the Internet, common sense is now a more powerful force than ever. Myth or no, the political effects of common sense will not be going away any time soon. Rosenfeld’s book may not necessarily provide an answer to all the thorny political issues of the present, but it does provide a fascinating look back through our intellectual history, and offers a excellent view of the foundations of modern populism.”—Christopher Holden, PopMatters

“As Sophia Rosenfeld, a historian at the University of Virginia, shows in Common Sense: A Political History, common sense was invented by scientists, philosophers, and politicians. It only seems self-evident now because the idea of common sense presents itself as common-sensical, as though everyone, were he not disabused of the notion by experts, would know that he possessed it. Common sense is, as she puts it, a ‘slippery’ idea—the kind of idea that covers its own tracks… To understand how democracy works, you have to understand the way that the crazy dream of common sense is nurtured, maintained, exploited, and defended.”—Josh Rothman, The Boston Globe “Brainiac” blog

“Breathtakingly original and daring, this book will force every reader to rethink the foundations of democracy in the modern world.”—Lynn Hunt, author of Inventing Human Rights: A History

“Sophia Rosenfeld’s superb intellectual history traces the strange birth and controversial afterlives of one of our most fundamental political concepts. Lively and learned, it sheds long-range light on contemporary anxieties about democratic populism and those who would manipulate it in the name of ‘common sense.’”—David Armitage, author of The Declaration of Independence: A Global History

“Rosenfeld illuminates one of the key ingredients of democratic-populist politics: that the common sense of the people offers a better guide to politics than the wisdom of elites. Learned and arresting, this book compels us to see that the rhetoric of common sense is anything but straightforward—or common.”—Daniel T. Rodgers, author of Age of Fracture

“A tour de force. Rosenfeld shows, as no scholar has before, how what was once a technical term in Aristotelian philosophy was transformed over the long eighteenth century to become the justification for the democratic wisdom of ‘the people.’”—Christopher Grasso, Editor, William and Mary Quarterly