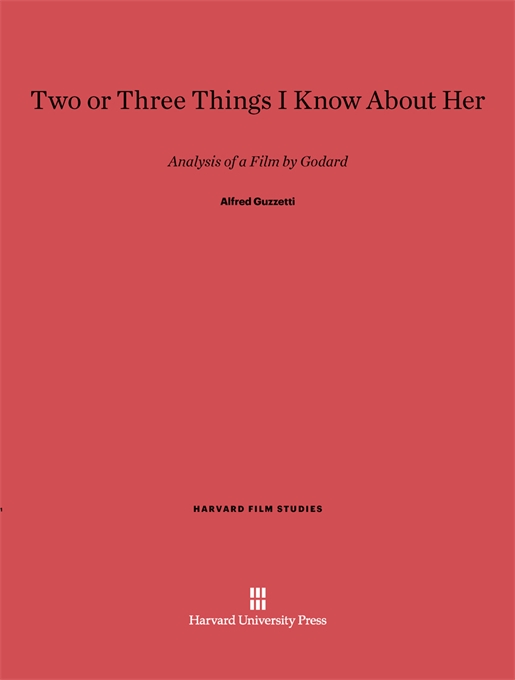 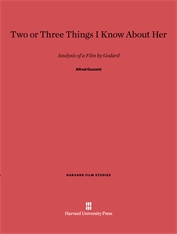 Two or Three Things I Know about Her

Analysis of a Film by Godard

Jean-Luc Godard is one of the most inventive filmmakers of our time, and 2 ou 3 choses que je sais d’elle (1967) is, in Alfred Guzzetti’s view, his most complex and powerful work. In this addition to the Harvard Film Studies series, Guzzetti not only provides a close analysis of Godard’s themes and techniques but devises a novel format for presenting the film.

Guzzetti has divided the 227 shots in 2 ou 3 choses into 18 sequences according to a simple and logical system that reflects the episodic structure of the film. The rendering of each sequence includes at least one frame enlargement from each shot, the spoken text in French and English, the duration of each shot, and descriptions of camera and subject movements, sounds, and music. Thus the simultaneity of impression so characteristic of a film is conveyed more successfully than ever before in a work of film criticism.

The accompanying analysis, on facing pages, provides interpretation and commentary. Guzzetti’s reading of the film is thorough, intensive, and distinguished by the sharp perceptions of an experienced filmmaker. He elucidates Godard’s stylistic methods and the social, political, and philosophical contexts of the film. Sensitive in its appreciation of a complex work of art, this volume will take its place as a major contribution to the burgeoning discipline of film studies.