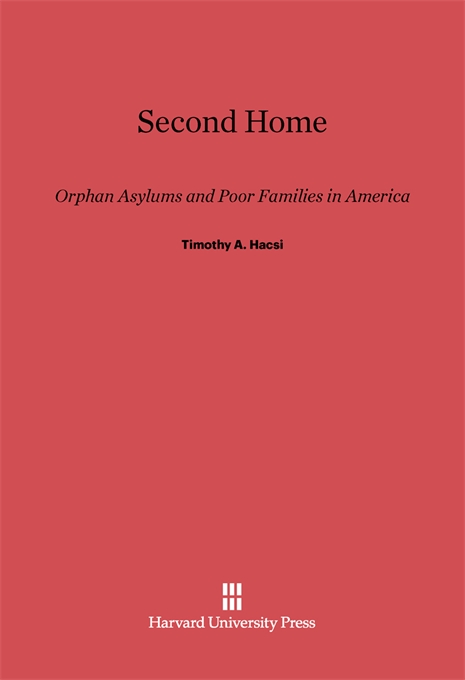 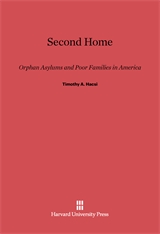 “[Second Home] raise[s] important questions about American social welfare history… The book discusses a wide variety of orphanages—religious and secular, public and private—and is based on published annual reports from eighteen orphan asylums and several state, national, and religious conferences; statistics gathered from earlier works on child welfare institutions and censuses; and other studies of orphan asylums. Hacsi’s major contribution is to demonstrate conclusively that asylums across time and space were primarily concerned with protecting children and preparing them for life rather than reforming them. As Hacsi shows, almost all asylums shared the common goals of providing children with a secular education and moral values and making the institution feel like a ‘second home.’”—Susan L. Porter, Journal of American History

“Second Home is an important synthesis of current literature on the history of the orphan asylum and should be considered a thorough introduction to the subject at this time. It is certainly important reading for those looking to the past for solutions to the present.”—Judith Dulberger, Journal of Social History

“From a national perspective, Hacsi examines the similarities and differences of orphanages over time and across different regions. He also compares orphanages sponsored by different religions and serving different ethnic and racial groups… Hacsi seeks to set the record straight as to just what orphan asylums were like. In that sense, his book is invaluable.”—Judith A. Trolande, North Carolina Historical Review

“[An] excellent history of orphanages in the United States… Hacsi’s well researched and well written account of the rise and decline of orphan asylums in America is essentially a heartfelt and subtle argument about the best ways in which a society can care for its dependent children. He has written the first full-length account of the development of orphan asylums from the early nineteenth century. A prodigious amount of research has found its way into this book and facts, opinion and argument are interwoven in a delicate and deftly nuanced study… This book is essential reading for those who wish to understand how current issues around child welfare have developed. While it deals with American institutions, many of Hacsi’s insights are relevant to the development of childcare policies in European countries. Hacsi argues that it is by addressing the causes of poverty rather than dealing with its causalities that the care of children can best be addressed. It is difficult to disagree with him.”—Maria Luddy, Social Policy [UK]

“Hacsi’s deeply researched, well-written study overcomes the inherent defect of recent case studies of orphanages—their lack of representativeness—by surveying the entire range of institutions from 1800 to the Great Depression… Hacsi’s systematic, comprehensive, and concrete account of the institutions’ functions, managerial style, funding, admission policies, daily routine, and treatment of children makes his book especially authoritative. Also of value is the author’s identification of the long-term changes in the functions of asylums… [This is an] excellent overview of American childcare.”—E. W. Carp, Choice

“Tim Hacsi has produced a wise and humane account of a complex American social institution now all but forgotten, the orphanage. Deeply researched and clearly argued, Second Home reminds us of the sharp historical debates about how best to care for dependent children. This important book shows how we have so often failed to place the needs of children above the rhetoric. The rise and fall of the orphanage, described so impressively in Second Home, has critical implications for contemporary debates about poverty, child care, and child welfare.”—Allan M. Brandt, Harvard University

“Second Home makes an original and significant contribution to the growing field of welfare history… Hacsi’s study is a pioneering work. It is based on a careful reading of a great body of secondary literature, and on critical research into a wide range of primary printed and manuscript records… Hacsi writes clear, direct prose… His findings will inform the understanding of specialists in welfare history, add to the knowledge of social historians (whose fields may be women’s, family, urban history), and be accessible to laypersons concerned with current issues of child welfare… His judgments are both subtle and balanced; they are firmly grounded on empirical evidence… Hacsi sets forth the personal and human dimensions of the subject whether the actors are parents, agency boards, superintendents, social workers, organizers of private agencies or proponents of public policy, and the children themselves. He is sensitive to factors of gender, class, region, ethnicity, and religion. His descriptive analyses of orphans, half-orphans, of length of stay, of placement, and of underlying motives are all sound.”—Clarke A. Chambers, University of Minnesota

“The most thorough investigation of orphanages available to date. This book is packed with insights about funding, management, lengths of stay, corporal punishment, and many other issues.”—Kenneth Cmiel, author of A Home of Another Kind: One Chicago Orphanage and the Tangle of Child Welfare