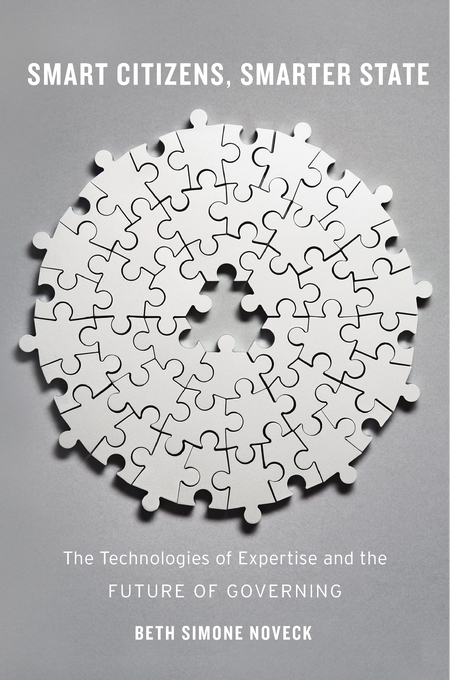 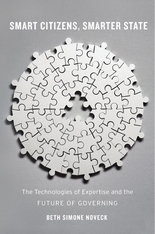 The Technologies of Expertise and the Future of Governing

“The ultimate goal of Smart Citizens, Smarter State is not simply a more competent regulatory state, but a transformed relationship between government and the governed. To policymakers and bureaucrats, Noveck makes the case that soliciting citizen expertise can make governance more effective; to democratic theorists, Noveck argues that providing expertise is a genuine form of civic engagement… The strongest characteristic of Smart Citizens, Smarter State is its intellectually modest approach: It builds on existing programs, can be scaled up quickly or slowly, and is predicated on experimentation rather than centralized decision-making. That makes it a great reform agenda for those who have been burned by sweeping overhauls and grandiose promises before.”—Andrew Mayersohn, Boston Review

“I strongly recommend Smart Citizens, Smarter State to the new generation of scientists emerging at the interface of computing and public policy. Those with technology and ‘hard’ sciences backgrounds would hugely benefit from a comprehensive understanding of government and policy domains in order to set new research agendas with significant potential for wider impact. At the other end of the spectrum, those with politics and social science backgrounds would find it very helpful for understanding the current technologies of expertise and the new trends in public decision-making, offering great promise for transforming the ways that governments should operate under the ongoing data revolution.”—Zeynep Engin, LSE Review of Books

“Smarter Citizens, Smarter State is a valuable contribution to a debate that will continue as technology plays an increasing role in almost every aspect our lives.”—J. P. O’Malley, New Internationalist

“Noveck offers an optimistic but realistic approach that aims to offer a theoretical and practical road map of policy making, champions more than transparent government, and encourages readers to not perceive citizens as mere passive policy bystanders. In a society that facilitates collaboration and allows for political institutions that are open by default, this approach calls for a fundamental transformation of how government engages citizens in policy making.”—A. E. Wohlers, Choice

“New peer-to-peer technology platforms have radically democratized how information spreads, how capital flows, and even how cabs get hailed in the twenty-first century. But our government itself remains a largely closed system, with relatively few opportunities for public engagement and collaboration. In this book, Beth Simone Noveck lays out a fresh and ambitious vision for a more democratized democracy, one in which our government takes full advantage of the Networked Age and the vast resources of its citizenry. Highly recommended!”—Reid Hoffman, cofounder/chairman of LinkedIn and coauthor of The Alliance: Managing Talent in the Networked Age

“A ringing call to arms for anyone who believes that government is busted and citizens could do more than anyone else to fix it. Following in the footsteps of John Dewey, Noveck explores the fundamental changes needed to bring to bear the vast resource of citizen expertise and ability in a time of rising demands and dwindling resources. The book summons smart citizens everywhere to action, be they makers, hackers, data analysts, or everyday experts. It also challenges members of the existing elite, daring them to imagine a more populist—and smarter—future.”—Paul W. Glimcher, Julius Silver Professor of Neural Science, Psychology, and Economics and Director of the Institute for the Interdisciplinary Study of Decision-Making, New York University

“Smart Citizens, Smarter State is a manifesto for a new way of governing. Digital technologies, Noveck argues, create abundant opportunities for governments to learn from their citizens and provide better services. Written with optimism and passion, this book brings the open source revolution to public administration.”—Jack M. Balkin, Knight Professor of Constitutional Law and the First Amendment, Yale Law School

“Crowd-sourcing works wonderfully in creating open-source software and online encyclopedias. Can it work in governance? Beth Noveck, who has spent years creating means of engaging citizens on the Internet, argues it can, if done wisely. This book—informed by experience, breathless energy, optimism, encyclopedic knowledge, and an extraordinary intellect—should be required reading for all who are interested in the question.”—Peter L. Strauss, Betts Professor of Law, Columbia Law School

“The endless debate that assumes ‘expertise’ and ‘democracy’ to be in conflict is here unpacked—and then carefully, intelligently reassembled from the perspective of new tools such as digital data and new ideas, including crowd-sourcing distributed expertise. The result? A false choice is demolished, replaced by a commonsense strategy that welcomes expertise without diminishing democracy’s robustness.”—Kenneth Prewitt, Columbia University