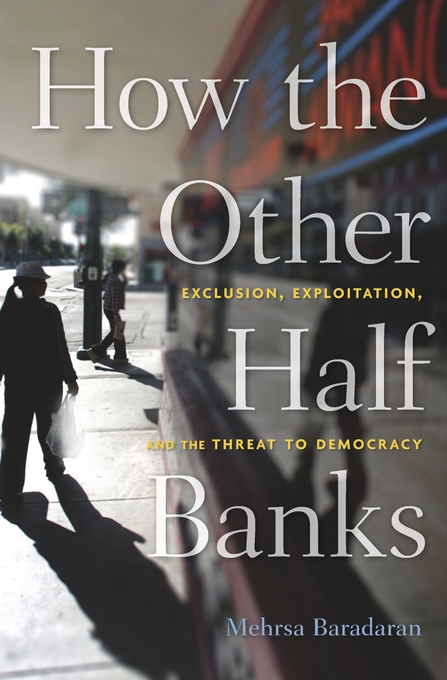 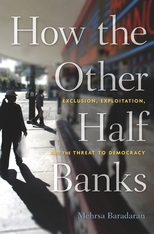 “An important voice… [Baradaran’s] excellent new book, How the Other Half Banks: Exclusion, Exploitation and the Threat to Democracy describes how, for decades, big banks have shed their social contract with the American public and transformed themselves into modern monstrosities which serve corporations and the wealthy and exploit or avoid the less affluent members of our society. Setting the stage with this historical context, Baradaran makes a compelling case for a postal banking system which would greatly benefit millions of struggling ‘unbanked’ Americans.”—Ralph Nader, The Huffington Post

“The title of [Baradaran’s] lean, angry book echoes the photojournalism of Jacob Riis, whose 1890 work on the slums of New York, How the Other Half Lives, spurred a housing reform movement… In a society built on credit as a means to wealth, low-income families deserve a much better deal, Baradaran argues. People do not opt for expensive products because they do not know any better, or are somehow reckless or irresponsible. They do so because they have no choice. And that is a national embarrassment.”—Ben McLannahan, Financial Times

“Baradaran argues persuasively that the banking industry, fattened on public subsidies (including too-big-to-fail bailouts), owes low-income families a better deal… How the Other Half Banks is well researched and clearly written… The bankers who fully understand the system are heavily invested in it. Books like this are written for the rest of us.”—Nancy Folbre, The New York Times Book Review

“Important and comprehensive… How the Other Half Banks is a fascinating read, and Baradaran has done a masterful job of turning what could be incredibly dry material into a well-paced, accessible chronicle of how the consumer financial services industry has changed since the beginning of the republic. She traces the history of the relationship between the banking industry and the nation, and shows how banks have gained more power, leaving the less well-off excluded and exploited… How the Other Half Banks tells an important story, one in which we have allowed the profit motives of banks to trump the public interest. Baradaran is right to take a pragmatic approach to these issues, as it seems unlikely that there is sufficient political will to renegotiate the social contract between banks and government so that it once again favors the public.”—Lisa J. Servon, The American Prospect

“How the Other Half Banks is a fascinating blend of history, policy, government, regulation, influence buying and some international comparisons… Indispensable for any future studies of American banking and regulation.”—Tom Groenfeldt, Forbes

“Mehrsa Baradaran’s terrific book, How the Other Half Banks, argues that we could and should ask banks to serve the poor and working class once again. In particular, post office banks (with storefronts and websites both) could provide those missing banking services: a place to park cash, earn interest and take out small amount loans… The idea is not hers originally, but she seizes and expands on the idea brilliantly and at great length. In particular, she advances the case for postal banking by reviewing the country’s earlier experience with postal banks, and by linking that experience to the modern problem of missing services for the poor and working class… One can appreciate why the policy world has come to Baradaran for her expertise, and this book will constitute a central contribution to the debate… I will recommend this book to all who are interested in structural racism… Baradaran demonstrates how the the post-deregulation restructuring of banking has disproportionately impacted communities of color, and how postal banking and other public options might bring them back into the fold once more. Baradaran’s revival of postal banking, and her description of the disappearance of services in the wake of deregulation, is fresh and engaging, and I highly recommend [the] book for all who are interested in the structure of inequality.”—Daria Roithmayr, JOTWELL

“Steadily shedding low-profit clients, American banks flourished during three decades of deregulation, but, when the crunch came last decade, the U.S. government—spouting we-are-all-in-this-together rhetoric—rushed to their rescue. In good times, banks are free-market players. In bad times, they have all the comforts of state agents. The author’s emphasis is not on curtailing megabanks’ privileges—a reader could get the impression she thinks that case too obvious for lengthy exposition—but on providing secure, low-cost credit for those who need it most. Her back-to-the-future solution is postal banking. Although the idea sounds terribly old-fashioned—it hasn’t been seen in the U.S. since the 1960s—more than 50 nations, including Japan and Germany, maintain a vibrant postal-bank system, a pillar of their strong savings cultures.”—Brian Bethune, Maclean’s

“Baradaran charges that nearly half of the American population has been deprived of access to financial services at a fair price thanks to financial deregulation… A comprehensive addition to the ongoing discussions of both inequality and the financial system.”—Kirkus Reviews

“A fascinating in-depth view of why and how so many Americans struggle to find affordable banking services. Modern finance provides great opportunity but also many risks, through hidden fees or even outright deception. The crisis of 2008 was not an aberration—and we have not fixed the deep-seated underlying problems. A must read for anyone who aspires to build financial security for themselves, for their family, and for the nation.”—Simon Johnson, coauthor of White House Burning and 13 Bankers

“Do banks have a public responsibility to serve the poor? This captivating book argues that they do. A fresh and provocative perspective on the very old problem of the poor and debt.”—Patricia A. McCoy, coauthor of The Subprime Virus