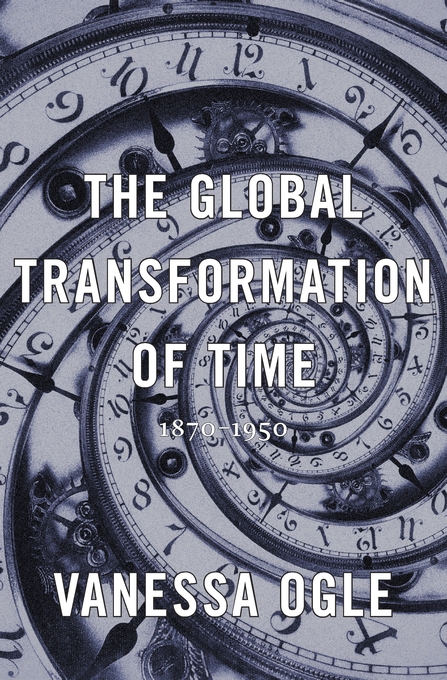 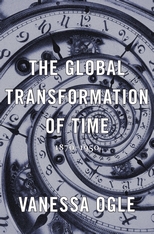 The Global Transformation of Time

“The powerful lesson of Ogle’s book is how the gradual global transformation of time over the course of the twentieth century came to suit many different parties, all of whom thought they had something to gain from new modes of integration and connectivity. The process we anachronistically call ‘globalization,’ Vanessa Ogle shows, was made up of forces that often used international means to solve national or parochial problems.”—Thomas Meaney, The Times Literary Supplement

“Ogle is more interested in the ways in which the concept of global time helped create what she calls a ‘global imagination,’ in which peoples and societies could be understood as parts of a single, developing world system. In this way, Ogle argues, the standardization of time reflected and reproduced the world’s European-led power hierarchies. International clocks and calendars united the world, but they also revealed and sometimes reinforced its inequities.”—G. John Ikenberry, Foreign Affairs

“Today, we take our global system of timekeeping largely for granted… Yet in her imaginative and thought-provoking new book The Global Transformation of Time: 1870–1950, Vanessa Ogle reminds us that standardization and simultaneity had to be invented… Ogle’s formidable work contributes to a new history of political economy which takes seriously the ideas, values, and acts of violence behind the emergence of global capitalism.”—Ian P. Beacock, The Atlantic

“How exactly horological chaos gave way to order is the subject of Ogle’s accessible and prodigiously researched book… Ogle has insightful things to say about many topics, from the role of cosmopolitan ports in disseminating new kinds of timepieces, to Islamic calendars, to the curiously moralizing tone of early discussions of using daylight savings schemes to prevent people from squandering precious sunshine hours. Perhaps her most important contribution is to show, via discussion of the various ways that power relations shaped debates relating to time, how foolish it is to view globalization, in any period, as a smooth, value-free process of flattening out.”—Jeffrey Wasserstrom, Financial Times

“Globalization is all the rage in the 21st century. What technology and cultural factors led to this shrinking world? One of the factors often overlooked, even taken for granted, is our system of uniform time… The progressives who advocated for uniform time found themselves dealing with nationalism, regionalism, and colonialism, as well as resistance from labor, religion, and other groups with a vested interest in the status quo. Ogle provides an intriguing glimpse into the machinations that led to the globalization of time.”—T. Timmons, Choice

“With impressive breadth, imagination, and originality, Ogle has produced an important and genuinely global history of time that reveals the rhythms, directions, unevenness, and contradictory consequences of what we now call globalization.”—Geoff Eley, University of Michigan

“Writing global history is still a high-stakes venture, and Ogle’s The Global Transformation of Time is an impressive testimony to the potential of the genre. We get a deep sense of the talk about time and calendars among transnational experts and politicians as well as the everyday intelligence that produced differentiated time regimes—times for travel, for work, for leisure, for religious practice or, as may be, for milking cows—across the globe in Berlin and Beirut, London and Bombay, and their rural hinterlands. Reading this book is a tremendous intellectual pleasure from beginning to end.”—Michael Geyer, University of Chicago