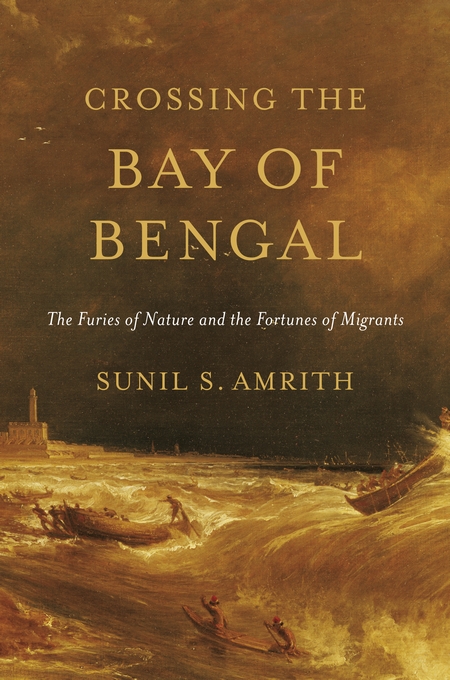 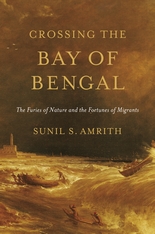 Crossing the Bay of Bengal

The Furies of Nature and the Fortunes of Migrants

“Fascinating… Although several books have been written about the strategic and geopolitical significance of the Indian Ocean…there is little awareness of the cultural and historical ties that bind diverse nations bordering the bay. Amrith’s signal achievement is to bring these ties to light. In doing so, he gives voice—and an identity—to one of the most complex and culturally interesting regions of the world… Amrith’s excavation of this culture is painstaking and meticulous. He digs deep into the archives, drawing on journals, letters and official colonial records to assemble an account that dates back to the first millennium… The result of all this research is a textured biography of a region… This is a formidable work of scholarship… It is the sheer accumulation of information, and the multiple, interwoven strands in this profoundly interdisciplinary work, that yield such an impressive, multifaceted portrait… [A] remarkable book.”—Akash Kapur, The New York Times Book Review

“Sunil Amrith consolidates his reputation for intellectual sophistication, a good historian’s sensitivity to detail and a flair for large-scale tale-telling that produces work as page-turning as a novel. We are reminded that the Bay of Bengal, the world’s largest, long stood at the heart of global trade and imperial histories—the watery counterpart to the overland silk route that connected the Indian Ocean with Asia, Mediterranean societies and even South America via the flow of goods such as silver and pepper… Read this book for information, for convincing analytic nuance, as a humbling shake-up of one’s worldview, and as a series of heart-stopping tales.”—Caroline Osella, Times Higher Education

“Sunil Amrith’s astonishingly researched and lyrically written book evokes and showcases the toils, trials and fortunes of millions of Indians who have made the turbulent expanse of water from Trincomalee, Chennai and Vishakhapatnam to Calcutta, Chittagong, Rangoon, Penang, Malacca and Singapore their karm-bhoomi over the last several centuries. Crossing the Bay of Bengal is, in a very real sense, a life of that Bay itself, as it was buffeted and regulated by the monsoon winds during the long Age of Sail, then harnessed by steamships from the 1870s.”—Shahid Amin, Indian Express

“In refocusing on the Bay and restoring a Braudelian sweep to its history, this nicely written and meticulously researched study could prove as timely as it is instructive.”—John Keay, Literary Review

“The highlight of this…book is the way Amrith introduces the bay’s early trade routes and encourages further reading into its ancient civilizations—from the medieval Hindu-Buddhist Srivijaya empire of Sumatra, who ruled much of Southeast Asia, to the powerful Chola (southern India) dynasty’s thriving China trade. Such accounts reveal vibrant ‘East-meets-West’ business communities where Arab, Indian and, later, European ships moored alongside Chinese junks for cloth, spices, opium and Mexican silver. Amrith brings these images to life with clear maps and thoughtful research, such as the observations of Portuguese apothecary Tomé Pires, who noted 84 languages ‘from the Middle East to China’ in early 16th-century Melaka. Equally engaging is the way Amrith portrays traders’ study of the bay’s monsoons, and how they intermarried with locals from across the bay to create hybrid cultures and architecture that embraced multiple beliefs and traditions.”—William Wadsworth, The South China Morning Post

“Despite its many familial, religious, and commercial linkages, perhaps because of its lack of a unifying political structure the region has too often been pushed into the shadows… The author weaves a richly vivid tapestry of a vast movement of people, principally South Indian laborers, sailing eastward across the bay to Burma, Malaysia, and Singapore… Rising sea levels are making new geographical patterns to which the low coastal lands of the Bay of Bengal are especially susceptible. Amrith remarks that the ocean has changed more in the last 30 years than in all of human history… Substantive and gracefully written.”—J. C. Perry, Choice

“Amrith covers the historical background, the political and social world of the migrants, and the human suffering: the inhumanity of plantation life, disease and high mortality rates, and the aftermath of the crumbling of the European empires.”—Ravi Shenoy, Library Journal

“Admirably ambitious yet eminently readable, Crossing the Bay of Bengal is one of the most engaging works of history to come my way in a long time.”—Amitav Ghosh, writing at amitavghosh.com

“Amrith uncovers new horizons in oceanic history as he sets sail with Tamil migrants across the turbulent waters of the Bay of Bengal. This exquisitely crafted book deftly traces the migratory patterns and cultural flows that connect South and Southeast Asia while demonstrating the power and limits of human agency in shaping the environmental destiny of the sea.”—Sugata Bose, author of His Majesty’s Opponent

“Exquisitely crafted and exhaustively researched, this book will become a classic in global and oceanic history. Few studies of world history can rival the breathtaking interdisciplinary reach and sheer narrative splendor of this book.”—Isabel Hofmeyr, author of Gandhi’s Printing Press

“Reading this book is pure joy. Beautifully written, with lyrical tenderness and subtle concern for the voices of migrants, Crossing the Bay of Bengal portrays the history of the Bay transformed over epochs, from medieval times to the present, in all its environmental, economic, social, and political complexity.”—David Ludden, author of India and South Asia: A Short History