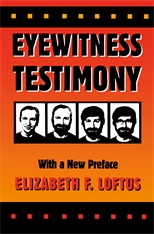 Every year hundreds of defendants are convicted on little more than the say-so of a fellow citizen. Although psychologists have suspected for decades that an eyewitness can be highly unreliable, new evidence leaves no doubt that juries vastly overestimate the credibility of eyewitness accounts. It is a problem that the courts have yet to solve or face squarely.

In Eyewitness Testimony, Elizabeth Loftus makes the psychological case against the eyewitness. Beginning with the basics of eyewitness fallibility, such as poor viewing conditions, brief exposure, and stress, Loftus moves to more subtle factors, such as expectations, biases, and personal stereotypes, all of which can intervene to create erroneous reports. Loftus also shows that eyewitness memory is chronically inaccurate in surprising ways. An ingenious series of experiments reveals that memory can be radically altered by the way an eyewitness is questioned after the fact. New memories can be implanted and old ones unconsciously altered under interrogation.

These results have important implications for court reform, police interrogation methods, defense strategy, and many other aspects of criminal and civil procedure. Eyewitness Testimony is a powerful book that should be required reading for trial lawyers, social psychologists, and anyone who considers the chilling prospect of confronting an eyewitness accusation in a court of law.