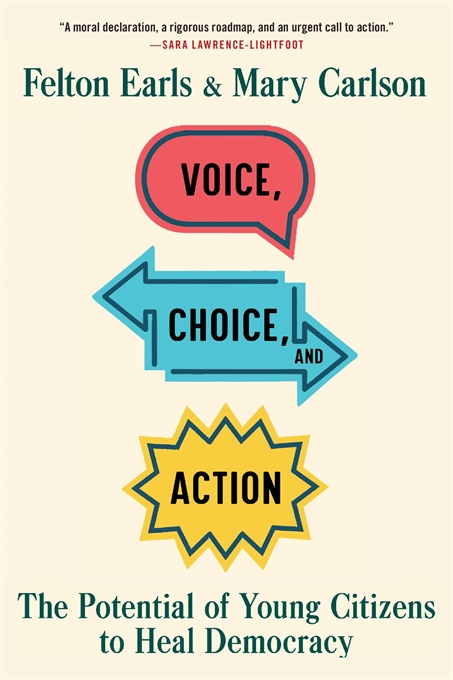 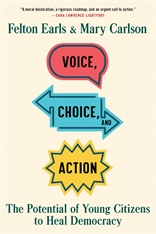 The Potential of Young Citizens to Heal Democracy

“A book for these times as we confront the fault lines in our democracy…A deeply provocative work about the place of children in strengthening our sense of community.”—Alex Kotlowitz, author of There Are No Children Here

“Earls and Carlson have discovered…an aspect of development previously unrecognized: how children and youth can find their voice, feel empowered to use that voice, and translate that voice into political action. This is a remarkable book.”—Gordon Harper, Journal of the American Academy of Child & Adolescent Psychiatry

Compiling decades of fieldwork, two acclaimed scholars offer strategies for strengthening democracies by nurturing the voices of children and encouraging public awareness of their role as citizens.

Voice, Choice, and Action is the fruit of the extraordinary personal and professional partnership of a psychiatrist and a neurobiologist whose research and social activism have informed each other for the last thirty years. Inspired by the 1989 United Nations Convention on the Rights of the Child, Felton Earls and Mary Carlson embarked on a series of international studies that would recognize the voice of children. In Romania they witnessed the consequences of infant institutionalization under the Ceaușescu regime. In Brazil they encountered street children who had banded together to advocate effectively for themselves. In Chicago Earls explored the origins of prosocial and antisocial behavior with teenagers. Children all over the world demonstrated an unappreciated but powerful interest in the common good.

On the basis of these experiences, Earls and Carlson mounted a rigorous field study in Moshi, Tanzania, which demonstrated that young citizens could change attitudes about HIV/AIDS and mobilize their communities to confront the epidemic. The program, outlined in this book, promoted children’s communicative and reasoning capacities, guiding their growth as deliberative citizens. The program’s success in reducing stigma and promoting universal testing for HIV exceeded all expectations.

Here in vivid detail are the science, ethics, and everyday practice of fostering young citizens eager to confront diverse health and social challenges. At a moment when adults regularly profess dismay about our capacity for effective action, Voice, Choice, and Action offers inspiration and tools for participatory democracy.