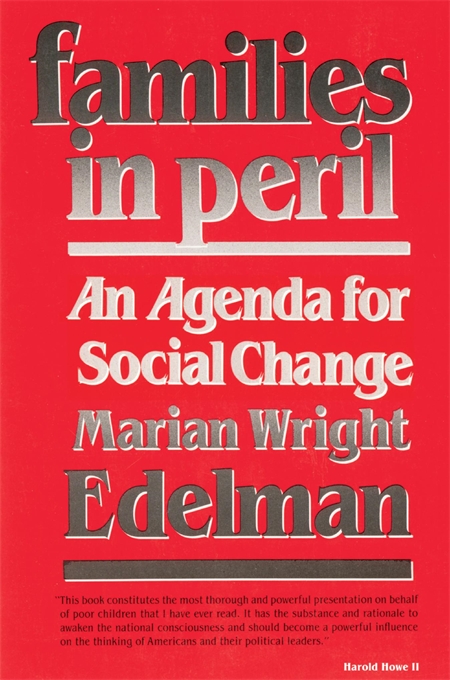 An Agenda for Social Change

“A book that radiates passionate concern for the millions of children who have been shunted aside in the current prosperity and whose plight has only lately begun to receive political and journalistic attention…Families in Peril is a powerful and necessary document.”—Jonathan Yardley, Washington Post

“This is a small, readable book with a large, urgent message—one that needs and deserves all the readers and attention it can get.”—Marilyn Gardner, Christian Science Monitor

“A leading advocate for young people…Edelman has ensured that even though the young cannot vote or make campaign contributions, they are not ignored in Washington… Senator Edward Kennedy described Edelman as the ‘101st Senator on children’s issues… She has real power in Congress and uses it brilliantly.’”—Nancy Traver, Time

“A graphic and eloquent documentation of how the hopes and accomplishments of the ’60s were undermined by the inflation of the ’70s, and today are virtually destroyed as a seemingly indifferent society tolerates a growing class of permanently impoverished families.”—Kirkus Reviews

“This book constitutes the most thorough and powerful presentation on behalf of poor children that I have ever read. It has the substance and rationale to awaken the national consciousness and should become a powerful influence on the thinking of Americans and their political leaders.”—Harold Howe II