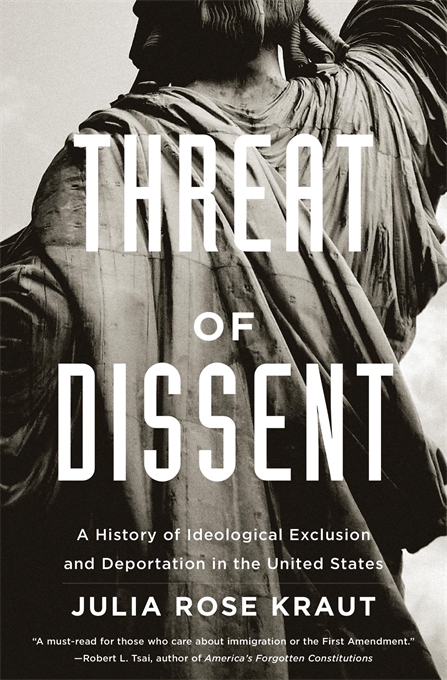 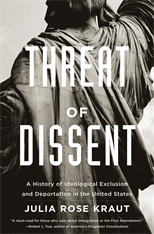 On the PEN America podcast The PEN Pod, listen to Julia Rose Kraut examine America’s dark history of ideological exclusion—laws and practices that bar or deport visitors or immigrants based on their beliefs or their expression:

“Suspicion of foreigners goes back to the earliest days of the republic…Kraut traces how different ideologies would be considered intolerably dangerous according to the dominant fears of a given era. Anarchism gave way to communism; communism gave way to Islamic radicalism.”—Jennifer Szalai, New York Times

“Magisterial and well written…A gripping, expansive story that traces the consequences of suspicions of ‘un-American’ ideologies and loyalties in federal jurisprudence from the War of 1812 through the still-raging War on Terror.”—Rachel Ida Buff, Journal of Interdisciplinary History

“An original, comprehensive history of one of the most pervasive and insidious forms of political repression in the United States—one few Americans know anything about.”—Michael Kazin, author of War Against War

In this first comprehensive overview of the intersection of immigration law and the First Amendment, a lawyer and historian traces ideological exclusion and deportation in the United States from the Alien Friends Act of 1798 to the the Trump administration.

Beginning with the Alien Friends Act of 1798, the United States passed laws in the name of national security to bar or expel foreigners based on their beliefs and associations—although these laws sometimes conflict with First Amendment protections of freedom of speech and association or contradict America’s self-image as a nation of immigrants. The government has continually used ideological exclusions and deportations of noncitizens to suppress dissent and radicalism throughout the twentieth and twenty-first centuries, from the War on Anarchy to the Cold War to the War on Terror.

In Threat of Dissent—the first social, political, and legal history of ideological exclusion and deportation in the United States—Julia Rose Kraut delves into the intricacies of major court decisions and legislation without losing sight of the people involved. We follow the cases of immigrants and foreign-born visitors, including activists, scholars, and artists such as Emma Goldman, Ernest Mandel, Carlos Fuentes, Charlie Chaplin, and John Lennon. Kraut also highlights lawyers, including Clarence Darrow and Carol Weiss King, as well as organizations, like the ACLU and PEN America, who challenged the constitutionality of ideological exclusions and deportations under the First Amendment. The Supreme Court, however, frequently interpreted restrictions under immigration law and upheld the government’s authority.

By reminding us of the legal vulnerability foreigners face on the basis of their beliefs, expressions, and associations, Kraut calls our attention to the ways that ideological exclusion and deportation reflect fears of subversion and serve as tools of political repression in the United States.