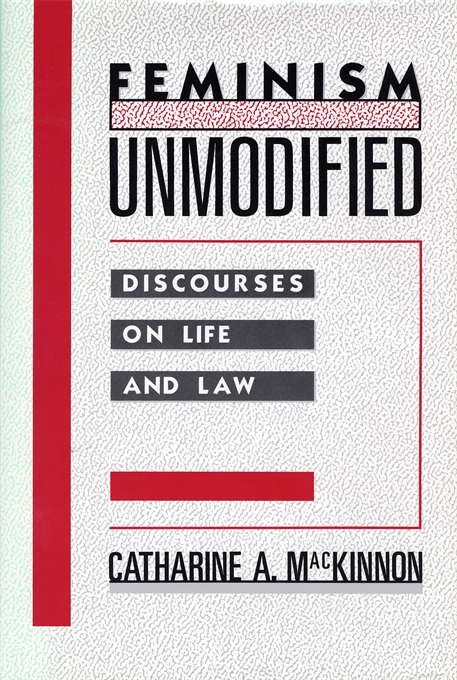 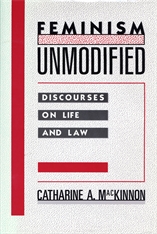 Discourses on Life and Law

“[MacKinnon’s] book offers an unorthodox but relentlessly consistent perspective on issues fundamental to feminism. It is passionate, brilliant, polemical and sectarian. Ms. MacKinnon defends what is frequently called ‘radical feminism.’ As the title of her book indicates, she believes this approach to be the only true or genuine feminism because it alone speaks for all women… Her position is grounded on a clear assertion of the primacy of the social over the biological… Fundamental to her radical feminism is the claim that gender is a system of dominance rather than of difference… Ms. MacKinnon offers a systematic and persuasive perspective on issues that are central not only to feminism but to social theory in general.”—Alison M. Jaggar, The New York Times Book Review

“This is heavy stuff. [The book] does not tell us what to do. It may, however, make us think, and challenge, and possibly act.”—Lorraine Schmall, ABA Journal

“[The book] is to feminism what The German Ideology is to Marxism. Using the tools of sociology of knowledge, Catharine MacKinnon relentlessly uncovers male bias, also known as objectivity and male perspectives also known as universality… On every page are epigrams one wants to print and hang on one’s walls.”—Pauline B. Bart, American Journal of Sociology

“MacKinnon has been perhaps the most important force behind the burgeoning theoretical literature in law on sex discrimination and feminist theory… Each of the essays published in [the book] stands on its own, making the book a collection of separate entries rather than one sustained argument. Because each essay was originally a speech, the discussions are lucid and dramatic, with the dynamism, immediacy, and sense of discovery of a live presentation; they are also filled with irony, wit, and humor… The book contains brilliant insights, genuine creativity, and rare originality. It should have a significant impact on thinking about sex discrimination and on social and legal thought more generally.”—Harvard Law Review

“MacKinnon dispatches from her post on the front line of the sexual battlefield searing, sharp communiqués that voice a fierce, relentless, and finally persuasive analysis of how pornography, a perversion of free speech, perpetuates the powerlessness of women.”—Derrick Bell, Harvard Law School

“Catharine MacKinnon’s Feminism Unmodified is a remarkably penetrating, bracingly uncompromising view of what it means to be a woman in our society. Written with extraordinary incisiveness and an acid wit, this is an important book for anyone interested in freedom.”—Peter Bogdanovich

“In this book MacKinnon enlarges our understanding of the nature of civil rights as applied to women. MacKinnon’s radicalism is thrilling, her determination brilliant, her passion literal. With rigor and irony MacKinnon teaches us what feminism—unmodified by cowardice or by disassociation from other women—is, what it sounds like, and what its goals are. MacKinnon’s identification with silenced women is precisely what defines feminism unmodified.”—Phyllis Chester, Ph.D., author of Women and Madness

“It’s a zinger. Ms. MacKinnon has made a difference before, and this book should further change society.”—Miles Lord, former Chief Judge of the Federal Court for the District of Minnesota

“Catharine MacKinnon’s discourses in Feminism Unmodified are final evidence, if any were needed, that hers is the most powerful mind and forceful voice now at work in this critical area of law. I commend her book most vigorously to many who question as well as those who accept her position.”—Burke Marshall, Yale Law School

“Feminism Unmodified shows Catharine MacKinnon to be one of the most brilliant, original, thought-provoking, and uncompromising feminist theoreticians and strategists in the contemporary United States.”—Diana E. H. Russell, Department of Sociology, Mills College, author of Rape and Marriage

“I wish to celebrate this book by a peer, a book for reading by men should they wish to keep up with the human race.”—Gerry Spence, author of Trial by Fire