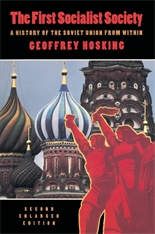 A History of the Soviet Union from Within, Second Enlarged Edition

“The First Socialist Society…allows its readers to go far beyond Moscow and the Kremlin to take a closer look at Soviet life in historical perspective… Hosking offers a fresh—and refreshing—look at the Soviet Union in the 1980s that is both well-informed and provocative.”—W. Bruce Lincoln, The Los Angeles Times

“This is a first-rate introduction to Russian history since 1917… No one reading it can fail to be impressed by its sound sense, its mature weighing up of the issues and its considered judgments. It should certainly be in the hands of everyone wishing to be informed about present-day Russia.”—Pierre Watter, The Times Educational Supplement

“Professor Hosking’s lively and well-informed history of the whole period from 1917 to 1984 covers not only politics and society but also religion and the nationalities, difficult subjects which are often neglected… The outstanding merit of Professor Hosking’s book…is that the author knows and understands Russians, and brings this understanding to bear on his study of history. This stimulating study…will help students to think about the significance of the Soviet experience, and to begin to appreciate what it has been like to be a Russian in this terrible and glorious century.”—R. W. Davies, The Times Higher Education Supplement