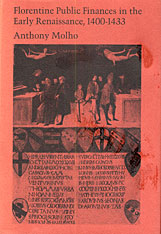 In his application of statistical methods to history, Mr. Molho offers a new approach to the study of Florentine politics.

Scholars have long recognized that Florence’s deficit-financing of its wars of independence against the Visconti of Milan had far-reaching economic, political, and social effects, but this is the first document-based history to provide concrete support for that general knowledge.

Focusing on the governmental and fiscal agencies of Florence as well as a number of memoirs and account hooks written by Florentine citizens, Mr. Molho has gathered and statistically reconstructed much archival material on Florentine taxation, public income, and expenses.

He concludes that between 1423 and 1433 Florence underwent a prolonged and vast fiscal crisis that affected both the fiscal structure of the city and its constitutional and institutional framework. His work thus sheds new light on Cosimo de’ Medici’s rise to power in 1434.