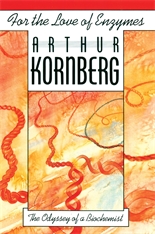 For the Love of Enzymes

The Odyssey of a Biochemist

In 1645 the Japanese samurai Musashi Miamoto wrote A Book of Five Rings, which described the attitudes necessary for individual success. Though he was a swordsman, his book was not limited to combat but addressed the much broader question of how to achieve excellence in life through study, discipline, and planning. It is still avidly read in Japan today. Arthur Kornberg’s book is a modern-day Book of Five Rings that replaces the medium of swordsmanship with that of biochemistry, particularly enzymology. As Kornberg describes his successive research problems, the challenges they presented, and the ultimate accomplishments that resulted, he provides us with a primer in the strategies needed to do scientific work of great significance. Moreover, these strategies are played out in the context of solving some of the great biochemical problems of the twentieth century.

The ability to manipulate and alter DNA fired a revolution that forever changed the nature of biology. Arthur Kornberg is a primary architect of that revolution, arguably one of the two or three most important biologists of this time. Prior to Kornberg, genetic information and later DNA were imbued by biologists with an almost vitalistic aura. Kornberg demonstrated that DNA is a molecule synthesized by enzymes, like all other chemical constituents of the cell. More important, he trained a school of scientists who focused on and discovered many of the enzymatic activities that act on DNA. It is these enzymes in particular that allow modern “genetic engineering.”

For the Love of Enzymes does not describe a single lucky or hard-won accomplishment. Rather, it is the story of thirty years of decisive campaigns, nearly all of which led to insights of major significance. In relating his story, Kornberg never avoids the difficult question of “why”: why he felt classical nutritional studies had reached a plateau, why he turned to enzymology as a discipline in which the important answers would be found, and why he believes the study of enzymes will grow ever more important as we face the new scientific frontier of brain function.

This book will challenge students of biology and chemistry at all levels who want to do important work rather than simply follow popular trends. It will also delight and inform readers who wish to understand how “real” science is done, and to learn of the values that guide one of our greatest researchers.