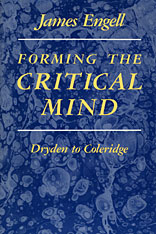 James Engell has prepared the first broad treatment of eighteenth- and early-nineteenth century British criticism to appear in a generation, presenting the views of scores of writers on a variety of questions, many of which remain live issues today.

While offering major reevaluations of Dryden, Hume, and Johnson, Engell demonstrates that eighteenth-century criticism cannot be represented by just a few major critics or by generalizations about Augustan taste, neoclassical rules, or “common sense.” He presents a complex and highly varied body of theoretical writing and practical application by dozens of critics including Rymer, Addison, Welsted, Ramsay, Hurd, Gerard, Newbery, Campbell, Blair, Beattie, Jeffrey, and Hazlitt. He also analyzes the continued relevance of their critical work, drawing connections with modern writers such as Eliot, Frye, Saussure, Barthes, Culler, Bakhtin, and Lévi-Strauss.

Engell concludes with a stimulating essay on the nature and function of the critical process itself. For students and scholars conversant with modern critical theory, Forming the Critical Mind will offer some surprising and interesting comparisons.