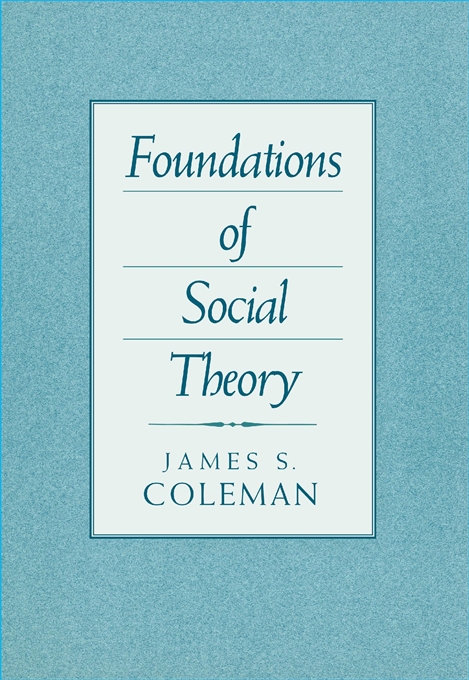 “Coleman’s study…exhibits some magnificent achievements. The foremost of these is a sophisticated elaboration and extension of the research program of rational choice theory as it applies to corporate actors, both public and private… This is an ambitious, highly intelligent, intellectually honest, and morally uplifting book. If it is true that radical conservatives make the best sociologists, then Coleman certainly fits the bill.”—Robert J. Holton, Critical Review

“A masterwork. Epic in scope, it is clear, engaging, and forcefully argued. Traditional sociologists will be unable to ignore its bold new agenda for their discipline. And the book will have a lasting impact on economics, political science, psychology, and other disciplines concerned with human behavior… [It] is indeed a fitting capstone to the career of one of this century’s most distinguished and creative sociologists.”—Robert H. Frank, Journal of Economic Literature

“A landmark in the history of social theory, combining comprehensive scope with depth and precision of analysis… This is a work which builds upon and deepens virtually all of Coleman’s extensive earlier sociological research… This lifetime corpus, culminating now in a theoretical synthesis, assures Coleman a place in the history of sociology on at least an equal level with Weber, Durkheim, and a few others: he is a master of sociological thought… This is a book for our time. Every social scientist will want to read and learn from it.”—Thomas J. Fararo, Social Science Quarterly

“The most important book in social theory in a long time. Coleman demonstrates formally and with numerous examples that a rational choice model of behavior has enormous power in explaining social phenomena. This book will give sociology a strong push in a new direction.”—Gary S. Becker, Nobel Laureate, University of Chicago