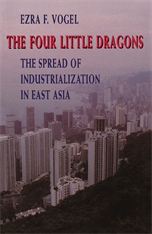 The Spread of Industrialization in East Asia

Japan and the four little dragons—Taiwan, South Korea, Hong Kong, and Singapore—constitute less than 1 percent of the world’s land mass and less than 4 percent of the world’s population. Yet in the last four decades they have become, with Europe and North America, one of the three great pillars of the modern industrial world order. How did they achieve such a rapid industrial transformation? Why did the four little dragons, dots on the East Asian periphery, gain such Promethean energy at this particular time in history?

Ezra F. Vogel, one of the most widely read scholars on Asian affairs, provides a comprehensive explanation of East Asia’s industrial breakthrough. While others have attributed this success to tradition or to national economic policy, Vogel’s penetrating analysis illuminates how cultural background interacted with politics, strategy, and situational factors to ignite the greatest burst of sustained economic growth the world has yet seen.

Vogel describes how each of the four little dragons acquired the political stability needed to take advantage of the special opportunities available to would-be industrializers after World War II. He traces how each little dragon devised a structure and a strategy to hasten industrialization and how firms acquired the entrepreneurial skill, capital, and technology to produce internationally competitive goods. Vogel brings masterly insight to the underlying question of why Japan and the little dragons have been so extraordinarily successful in industrializing while other developing countries have not. No other work has pinpointed with such clarity how institutions and cultural practices rooted in the Confucian tradition were adapted to the needs of an industrial society, enabling East Asia to use its special situational advantages to respond to global opportunities.

This is a book that all scholars and lay readers with an interest in Asia will want to read and ponder.