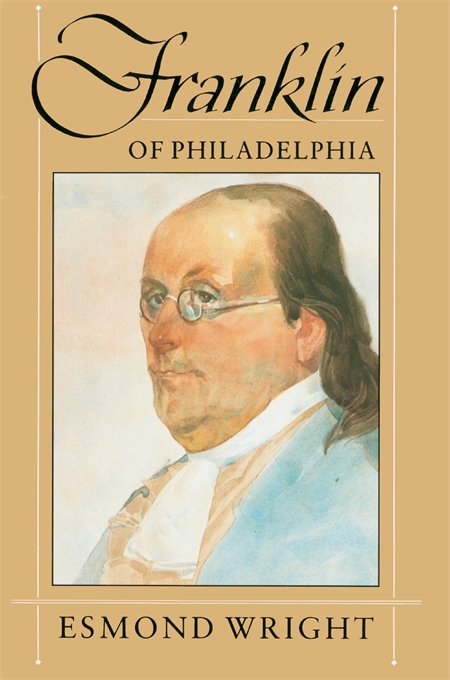 The most original and most delightful of the Founding Fathers, Benjamin Franklin was publisher and printer, essayist and author, businessman and “general,” scientist and philologist, politician and diplomat, moralist and sage—and a thoroughly rational patriot who was a major force in winning his country’s independence and securing its life in the Constitution. Born poor in Cotton Mather’s Boston, he was soon at ease in Quaker Philadelphia, and later in royal London, and in elegant Paris. Born with no advantages, he died wealthy and esteemed. He was the quintessential American, almost totally free of the limits of his environment, ready to accept any challenge, to speculate, experiment, and question.

Esmond Wright, the distinguished English scholar of America, sees Franklin as an Old England Man and a reluctant revolutionary; civilized, urbane, devious, and on occasion just a little unscrupulous. For, despite his charm and genius, Franklin was not admired by everybody. His contemporary John Adams thought little of his political abilities, and the Federalist pamphleteer William Cobbett called him a “crafty and lecherous old hypocrite.” In the next century, Mark Twain, Hawthorne, and Melville did not value him; still later, D. H. Lawrence despised the middle-class morality he promoted. Many today deplore his lack of interest in the arts or metaphysics, his lack of passionate commitment, his opportunism, his occasional coarseness. Yet his success in business, his many-faceted public career, his ingenious inventions and world-renowned scientific genius, his splendid prose style, his worldly wisdom, and the attractive personality that shines through his remarks and writings, made Benjamin Franklin the “new man” of the eighteenth-century dream and also vastly appealing to the modern temper. Wright’s new biography presents a fully rounded portrait of this remarkable man for all ages.

This first comprehensive biography of Franklin in fifty years has taken advantage of Yale’s massive edition-in-progress of Franklin’s papers and of the many specialized studies inspired by the correspondence. Franklin of Philadelphia, designed for the general reader, is also a work for scholars, for the author appends a thorough analysis of other interpretations of Franklin’s career and personality.