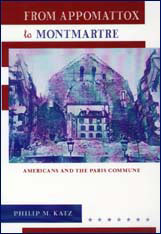 From Appomattox to Montmartre

Americans and the Paris Commune

The American Civil War and the Paris Commune of 1871, Philip Katz argues, were part of the broader sweep of transatlantic development in the mid-nineteenth century—an age of democratic civil wars. Katz shows how American political culture in the period that followed the Paris Commune was shaped by that event.

The telegraph, the new Atlantic cable, and the news-gathering experience gained in the Civil War transformed the Paris Commune into an American national event. News from Europe arrived in fragments, however, and was rarely cohesive and often contradictory. Americans were forced to assimilate the foreign events into familiar domestic patterns, most notably the Civil War. Two ways of Americanizing the Commune emerged: descriptive (recasting events in American terms in order to better understand them) and predictive (preoccupation with whether Parisian unrest might reproduce itself in the United States).

By 1877, the Commune became a symbol for the domestic labor unrest that culminated in the Great Railroad Strike of that year. As more powerful local models of social unrest emerged, however, the Commune slowly disappeared as an active force in American culture.