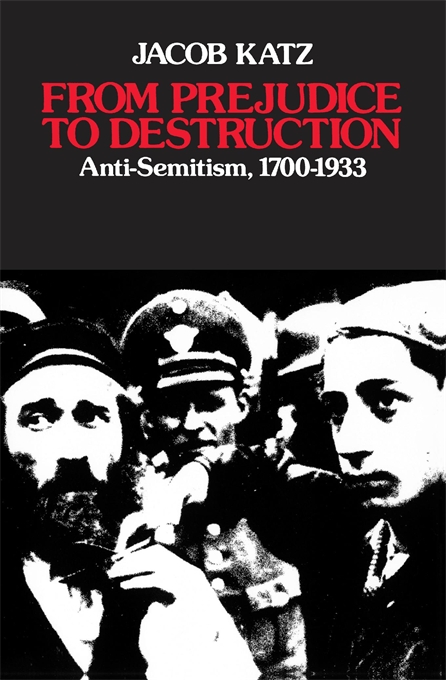 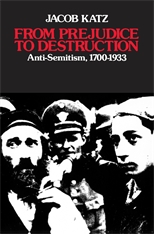 From Prejudice to Destruction

Jacob Katz here presents a major reinterpretation of modern anti-Semitism, which blends history of ideas about the Jews gradually became transformed and then, around 1879, picked up so much social force as to result in the premeditated and systematic destruction of the Jewish people of Europe.

Mr. Katz revises the prevalent thesis that medieval and modern animosities against Jews were fundamentally different. He also rejects the scapegoat theory, according to which the Jews were merely a lightning rod for underlying economic and social tensions. On the contrary, he argues, there were very real tensions between Jews and non-Jews, because the Jews were a highly visible and cohesive group and so came into conflict with non-Jews in competing for social and economic rewards.

In the late 19th century, Mr. Katz argues, hatred of the Jews shifted from their religion to more essential aspects of their character and behavior. The term “anti-Semitism,” he explains, which first came into use around 1870, was meant to describe this change. Thus, ironically, just as Jews were being integrated into the political state, skillful propagandists such as Theodore Fritzche and Houston Stewart Chamberlain were extraordinarily successful in spreading notions of Jewish racial inferiority and its threat to the pure Aryan stock. And so when Hitler came on the scene, the seeds of Jewish race hatred were widely sown.