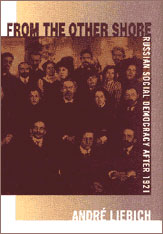 This book is an inquiry into the possibilities of politics in exile. Russian Mensheviks, driven out of Soviet Russia and their party stripped of legal existence, functioned abroad in the West—in Berlin, Paris, and New York—for an entire generation. For several years they also continued to operate underground in Soviet Russia. Bereft of the usual advantages of political actors, the Mensheviks succeeded in impressing their views upon social democratic parties and Western thinking about the Soviet Union.

The Soviet experience through the eyes of its first socialist victims is recreated here for the first time from the vast storehouse of archival materials and eyewitness interviews. The exiled Mensheviks were the best informed and most perceptive observers of the Soviet scene through the 1920s and 1930s. From today’s perspective the Mensheviks’ analyses and reflections strikingly illuminate the causes of the failure of the Soviet experiment.

This book also probes the fate of Marxism and democratic socialism as it tracks the activities and writings of a remarkable group of men and women—including Raphael Abramovitch, Fedor and Lidia Dan, David Dallin, Boris Nicolaevsky, Solomon Schwarz, and Vladimir Woytinsky—entangled in the most momentous events of this century. Their contribution to politics and ideas in the age of totalitarianism merits scrutiny, and their story deserves to be told.