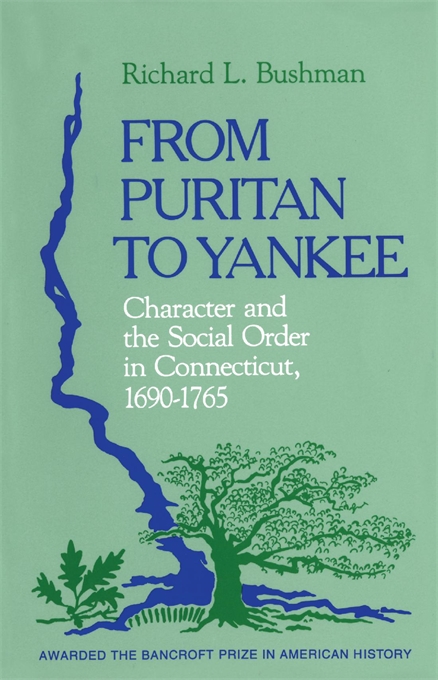 From Puritan to Yankee

Center for the Study of the History of Liberty in America

The years from 1690 to 1765 in America have usually been considered a waiting period before the Revolution. Richard L. Bushman, in his penetrating study of colonial Connecticut, takes another view. He shows how, during these years, economic ambition and religious ferment profoundly altered the structure of Puritan society, enlarging the bounds of liberty and inspiring resistance to established authority.

This is an investigation of the strains that accompanied the growth of liberty in an authoritarian society. Mr. Bushman traces the deterioration of Puritan social institutions and the consequences for human character. He does this by focusing on day-to-day life in Connecticut—on the farms, in the churches, and in the town meetings. Controversies within the towns over property, money, and church discipline shook the “land of steady habits,” and the mounting frustration of common needs compelled those in authority, in contradiction to Puritan assumptions, to become more responsive to popular demands.

In the Puritan setting these tensions were inevitably given a moral significance. Integrating social and economic interpretations, Mr. Bushman explains the Great Awakening of the 1740s as an outgrowth of the stresses placed on the Puritan character. Men, plagued with guilt for pursuing their economic ambitions and resisting their rulers, became highly susceptible to revival preaching.

The Awakening gave men a new vision of the good society. The party of the converted, the “New Lights,” which also absorbed people with economic discontents, put unprecedented demands on civil and ecclesiastical authorities. The resulting dissension moved Connecticut, almost unawares, toward republican attitudes and practices. Disturbed by the turmoil, many observers were, by 1765, groping toward a new theory of social order that would reconcile traditional values with their eighteenth-century experiences.

Vividly written, full of illustrative detail, the manuscript of this book has been called by Oscar Handlin one of the most important works of American history in recent years.