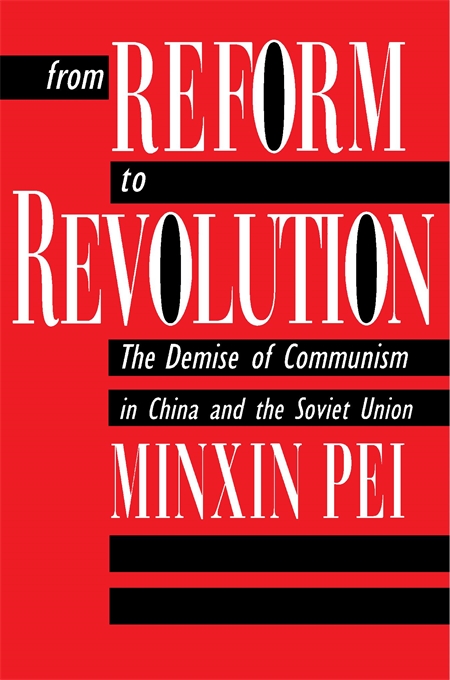 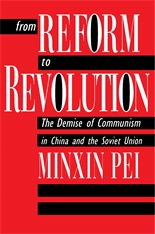 From Reform to Revolution

The Demise of Communism in China and the Soviet Union

“This is an immensely exciting, sustained analytical effort… (T)his book is quite likely to become a classic in its field.”—Pacific Review

“From Reform to Revolution makes an important contribution…and is likely to endure as a landmark study in the field.”—Journal of Asian Studies

“The first comprehensive effort to compare the recent political experiences of the Union of Soviet Socialist Republics and the People’s Republic of China by tracing their overlapping and diverging paths of regime change… Very tightly argued and erudite.”—Philippe C. Schmitter, Russian Review

“An outstanding scholarly work with a powerful argument, reams of relevant data, and a crisp, succinct presentation. It is among the very best of its genre.”—Barrett McCormick, China Journal

“Breathtaking… Pei is original in exploring and explaining the conventional wisdom that China’s Communist regime survived reform and the Soviet Union’s did not because one undertook economic reform first and the other political reform first. What is breathtaking is…the author’s range and detail, comprehending not only his native China, but the vast literature on the former USSR and its more than a dozen ‘republics.’”—James A. Robinson, American Journal of Chinese Studies

“Pei’s approach to sociopolitical change is rational-analytical. Rational social actors follow their interests, societies are seen as being governed by explicable laws within a systematic general comparative theory; any significant event has its (though ex post) explanation. Frequent references to past and present masters of social and political theory reveal the scholarly tradition and pedagogical skill of the author. Moreover, the reader cannot but admire the clarity of the narrative; concepts are always clearly defined, questions explicitly formulated, the style is balanced and accurate. The reader is invited to share a feel of rich factual complexity as well as a chess-like lawful quality in the flow of events.”—Ludek Rychetnik, Reviewing Sociology