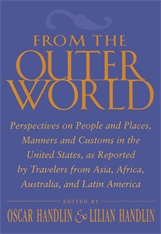 From the Outer World

Oscar and Lilian Handlin show us how the new voyagers in the twentieth century—from Asia, Africa, Australia, and Latin America—record their experiences in the United States. The narratives of the non-Europeans, they find, clearly reflect the circumstances of their composition, as well as the political prejudices of their authors. These literary products have earned far less attention than those of the English, French, Germans, and Russians, and this volume proposes to redress the balance.

The earliest of the thirty-one travel accounts was written by Rabindranath Tagore in 1924, and the most recent by V. S. Naipaul in 1989. Many accounts are newly translated from Arabic, Persian, Hebrew, and Spanish. Some authors are well known, but the less famous are equally insightful. Some insights are weighty, many are amusing. Octavio Paz, a sympathetic observer who admired his country’s neighbor, was uneasy that the most powerful country in the world sustained “a global ideology…as outdated as the doctrine of free enterprise, the steam boat, and other relics of the nineteenth century.” The Israeli journalist Hanoch Bartov observed that “God conceived the car first, with man an afterthought, created for the car’s use (a Southern California legend).” In coming to a truer understanding of the United States, these writers noted the frightening repercussions of unsettled lives, perceived class differentiation, contentions regarding the status of women, the sense of national unity amid diversity, and countless other issues of concern to those who try to find meaning in the contemporary world.