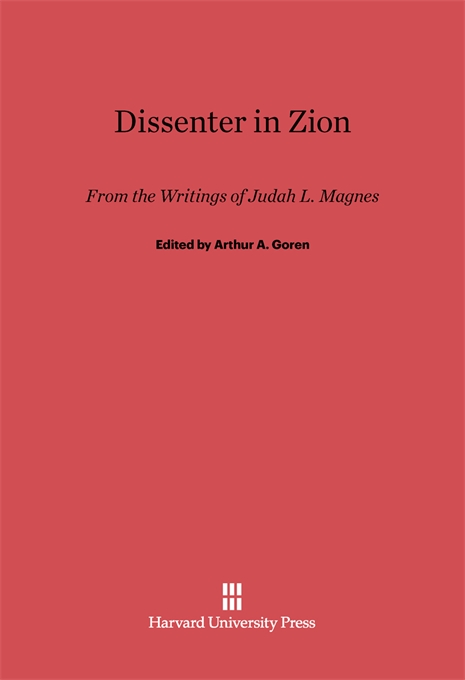 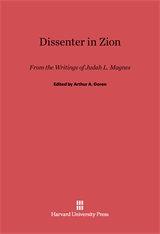 From the Writings of Judah L. Magnes

“Judah L. Magnes was the Jewish maverick personified, the perpetual dissenter from conventional wisdom and establishment politics. Though he was all his life a leader in the Jewish community, he nevertheless always remained the outsider, the critical voice, the political conscience, the moral castigator. More often than not the causes he espoused—in the Jewish community as in the larger society—went down to defeat, to end up in the dust bin of history.

Arthur A. Goren has now rescued Magnes from oblivion, dusted him off, and brought him and his causes once again into the light. This splendid collection of Magnes’s writings restores him as he was, always at the center of history in times thick with history. Magnes’s mind and eloquence were equal to the great themes which he engaged and the great controversies he argued: war and peace, Zionism and Jewish nationalism, religion and the nature of Jewish identity, social idealism and politics.

It is a striking testimony to Magnes’s depth of intellect and breadth of interest that his writings speak to us today with relevance and even urgency. A stimulating thinker in his time, he speaks to us also in our time. The great and still pressing issues of Jewish communal and political existence are alive in these pages. Magnes himself comes alive in Goren’s vivid portrait of the man and his world.”—Lucy S. Dawidowicz

“Judah L. Magnes was a striking combination of an American with a turn-of-the-century highmindedness, East European Jewish passion, and a devotion to pacifism. He was a Zionist who demanded equal justice for Jews and Arabs. His was a unique career in both America and Palestine. In this book, a lonely giant is remembered.”—Rabbi Arthur Hertzberg