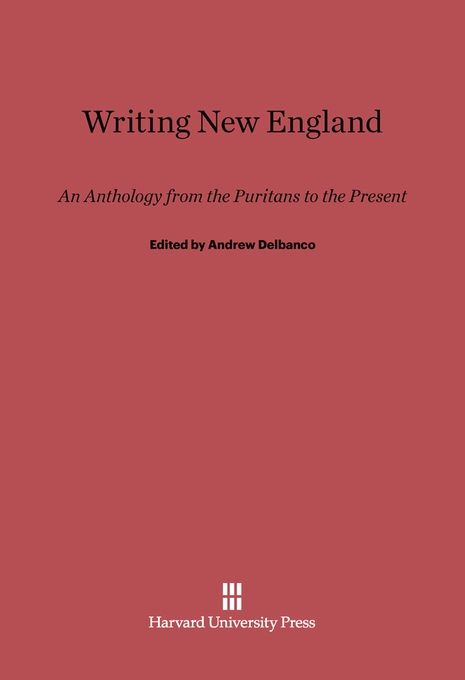 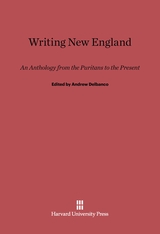 An Anthology from the Puritans to the Present

“Andrew Delbanco’s attractive anthology, which offers a judicious selection of material, pertinent both for readers who are new to the writing of the region and for those who it well. As Delbanco explains in his preface, he has tried to keep the anthology in line with his conviction that New England itself includes ‘different and distinct regions of cultural inheritance.’ He also works hard to show how the continuities in New England writing are inflected differently by African-Americans, Jewish Americans, Irish Americans, working-class Americans and American women, particularly when set along-side the classic texts produced by privileged white men. The anthology is wonderfully diverse.”—Kate Fullbrook, The Times Literary Supplement

“Handsomely produced…[and] imaginatively done… [This] anthology succeeds admirably in conveying, in Delbanco’s words, ‘how New Englanders have come to live in different and distinct regions of cultural inheritance.’ It manages also, in its inclusions and rediscoveries, to extend Thoreau’s remark in his ‘Ktaadn’ section from The Maine Woods printed here: ‘I am reminded by my journey how exceedingly new this country still is.’”—William H. Pritchard, Commonweal

“A book to keep by the reading light for years to come… The selections are both expected old friends and eclectic new neighbors, each with an introduction that suggests how it adds to an understanding of ‘the New England mind.’”—Michael Kenney, The Boston Globe

“Now arrives the definitive New England reader, a book written for the New England booster, the New England admirer, and, of course, that character indigenous to these parts, the New England reader… [Andrew Delbanco’s] luminous opening essay distills one of the great truths about great New England writing: It is produced by ‘the sort of mind that, with an acute sense of its own fallibility, seeks moral knowledge in the wisdom literature of the past.’ But Delbanco’s greatest gift is his sense of judgment. He knows, for example, that it is impossible to understand New England…without a passing acquaintance with Henry David Thoreau, Henry Adams, Henry James, Henry Wadsworth Longfellow—and, lest we forget, Henry Beston. He knows, too, that there is a difference between choosing the best known and the best representative selection of a writer’s work… One of the great New England virtues, besides a sense of the vanity of human wishes, is thrift, and here Delbanco has produced a metaphor of the region. There is not a page wasted in this volume, not an entry without a reason.”—David M. Shribman, The Boston Globe

“Readers concerned that a New England anthology of writing would slip into mawkish paeans to autumn and Yankee wisdom should know that Delbanco does not shy from the darker aspects of our region and its history… Delbanco’s business, at least in book form, has always been America—its culture, history and literature: whether he is anthologizing Emerson, Lincoln or the Puritans, or writing about American religion…Delbanco ensures that the path between past and present remains open and well-trod.”—Tim Lemire, The Concord Beacon

“Writing New England is a readable, usable, invaluable gift to readers of American literature and to those who appreciate the virtues of anthology… The literary landscape in New England is precious in its beauty; harsh in its honesty, and soaring in its genius. Merely by possessing this book we stake a claim in the bounty.”—Rae Francoeur, The Salem Evening News

“There is nothing now in print quite like Writing New England. Three things make the book stand out: its enlargement of one’s sense of the varieties of people who, over time, have inhabited New England; its insights into one region’s contributions to the country at large; and its sheer readability. Strongly recommended.”—D.D. Kummings, Choice

“Who and what made New England the nation’s intellectual and literary center is apparent in this expansive collection of writings by the abiding masters and luminaries of the day… [Writing New England] illustrate[s] the nuances of the ‘hope and disillusion, confidence and self-doubt’ that inform the New England mind… In each [section], writers explore the attitudes and characteristics that came to define the region: an ideal of justice, an intolerance of newcomers, and a ‘proprietary intimacy’ with the land… This [book] is a smorgasbord; we are unlikely to see its kind again soon.”—Kirkus Reviews

“This broad selection gives a deeper understanding of the flavor of New England writing, be it artistic, religious, legal, or political. Well-known writers, such as Thoreau, Emerson, and Dickinson, are balanced with writers less well known outside the region, and male voices are balanced by female. Introductory head notes to each section delineate the theme explored, placing the selections into context, while those for each selection provide biographical information and critical context.”—Karen E.S. Lempert, Library Journal

“Despite the proliferation of regional studies, particularly of the American South, there are relatively few collections of or studies about New England writing. Perhaps it’s because New England was the original region. Emily Dickinson, Ralph Waldo Emerson and Henry James are not generally considered New Englanders so much as Americans. Delbanco, a renowned scholar of the Puritan experience in America (author of The Puritan Ordeal), wants to call attention to the fact that these writers were not simply from New England but of it. In this beautifully conceived collection, Delbanco has interspersed with unchallenged figures such as Thoreau and Hawthorne a few pieces that have been all but lost to the general reading public… This is an excellent gathering of letters, poems, stories, essays and excerpts from novels and histories.”—Publishers Weekly