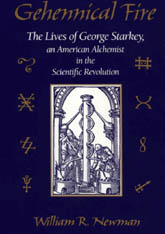 The Lives of George Starkey, an American Alchemist in the Scientific Revolution

Reputed to have performed miraculous feats in New England—restoring the hair and teeth to an aged lady, bringing a withered peach tree to fruit—Eirenaeus Philalethes was also rumored to be an adept possessor of the alchemical philosophers’ stone. That the man was merely a mythical creation didn’t diminish his reputation a whit—his writings were spectacularly successful, read by Leibniz, esteemed by Newton and Boyle, voraciously consumed by countless readers. Gehennical Fire is the story of the man behind the myth, George Starkey.

Though virtually unknown today and little noted in history, Starkey was America’s most widely read and celebrated scientist before Benjamin Franklin. Born in Bermuda, he received his A.B. from Harvard in 1646 and four years later emigrated to London, where he quickly gained prominence as a “chymist.” Thanks in large part to the scholarly detective work of William Newman, we now know that this is only a small part of an extraordinary story, that in fact George Starkey led two lives. Not content simply to publish his alchemical works under the name Eirenaeus Philalethes, “A Peaceful Lover of Truth,” Starkey spread elaborate tales about his alter ego, in effect giving him a life of his own.