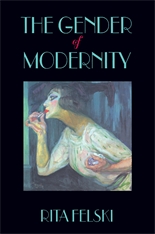 The Gender of Modernity

“Felski immerses herself in the messy ambiguities, symbioses, and contradictions of the modern to a degree that is rare and bravely ambitious. The book addresses an abundance of topics—fin de siècle sociological and psychoanalytic theory, consumer behavior, the aesthetics of decadence and sexual perversion, the rhetoric of first-wave feminism. While never ungenerous, Felski dismantles some recent favored assumptions. Reading her book, one feels that we are profligate with the words ‘subversive,’ ‘transgressive,’ and ‘resisting’ as terms of approbation. Felski recognizes that assessing the degree and kind of resistance requires deep knowledge of the context in which it occurs.”—Gail McDonald, Lingua Franca

“[An] important book… Felski has a talent for seeing how feminist questions are implicated in other kinds of cultural questions—and can be changed by them… By deftly combining cultural history and critical theory, becoming more deeply historicist in her scrutiny of fin de siècle modern literature in its various Anglo-American and European contexts, she uncovers some of the earlier, conflicting stories of a feminist aesthetics from within the philosophical and cultural webs in which they have long been entangled. This second book, then, by delving more deeply into intellectual antecedents of our assumptions about modern aesthetic genres, gives even more grounding to her earlier study. We now know more about the number of ways in which questions of feminist aesthetics have been only one aspect of the ‘culture of women’s modernity’ all along.”—Anita Plath Helle, South Carolina Review

“To entitle a book The Gender of Modernity is boldly to run the risk posed by handling overfamiliar concepts. Rita Felski has run that risk with expert skill, producing an important study which succeeds in its aim ‘to unravel the complexities of modernity’s relationship to femininity through an analysis of its varied and competing representations.’ Her project combines cultural theory with cultural history, seeking ‘to establish points of connection between the texts of the past and the feminist politics of the present.’”—The Year’s Work in English Studies

“The amplitude of Felski’s critical range and critical sympathies makes this a superb meditation on gender, and on modernity, taken separately and taken together, as Felski finally persuades us they must be. There is no other study I know of with the breadth of interest and the alertness to changing theoretical valences. Felski might be said to be writing an informed poststructuralist historical materialism, with energy and bravura. It would not be going too far to say that this is a wise book: scrupulously fair, politically committed, intellectually inclusive, interdisciplinarily exciting.”—Jennifer Wicke, New York University

“Felski demonstrates the centrality of gender and sexuality for the culture of modernism/modernity, and she does it in complex and subtle ways, making use of contemporary theory as much as of historical studies of the material at hand. As in her earlier book, Felski displays solid, up-to-date scholarly knowledge and a welcome sobriety in dealing with the often overheated theoretical discourses in the field. Her critiques of feminist, poststructuralist, Marxist, and other now common lines of argument are always fair, her writing is lucid, and her arguments sparkle with insight.”—Andreas Huyssen, Columbia University